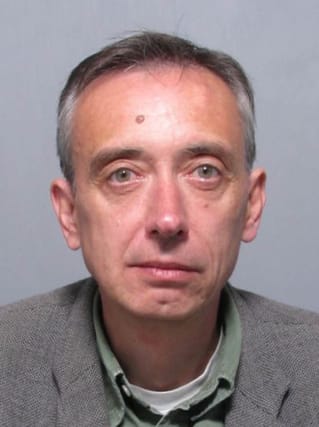 A former law lecturer arrested in Romania almost three years after he fled his crown court trial in England has been returned to the UK and charged with 11 further offences.

Julian Myerscough, 56, a former criminal law lecturer at the University of East Anglia in Norwich, went on the run from Ipswich Crown Court in September 2015 before a jury found him guilty of downloading indecent images of children.

He was convicted, shortly after he went missing, of 13 counts of possession of indecent images of a child and three counts of breaching a Sexual Harm Prevention Order.

He was sentenced in his absence at Chelmsford Crown Court last year to three years and six months' imprisonment and a Sexual Harm Prevention Order.

Myerscough was detained by law enforcement officers in Romania last month and his extradition was approved at a Romanian court.

He was collected from Bucharest by Suffolk Police officers and arrived back in the UK on Monday, the force said.

Myerscough was taken to Martlesham Police Investigation Centre and charged with 11 other offences alleged to have happened between 2001 and 2010.

He has been remanded in custody to appear before Ipswich Magistrates' Court on Tuesday.

Myerscough, originally from Bolton but who was living in Lowestoft, Suffolk, initially fled to Ireland after he absconded.

He was spotted on a ferry from Holyhead and was detained at a Dublin city centre hotel by Garda officers under a European Arrest Warrant in October 2015.

However, he thwarted extradition efforts with a series of appeals over two years, and was released from prison in Ireland as the High Court in Dublin deemed in August 2017 that too much time had passed.

A decision was taken to sentence him in his absence in September 2017.