Thousands of musicians arrive in Glasgow for piping festival 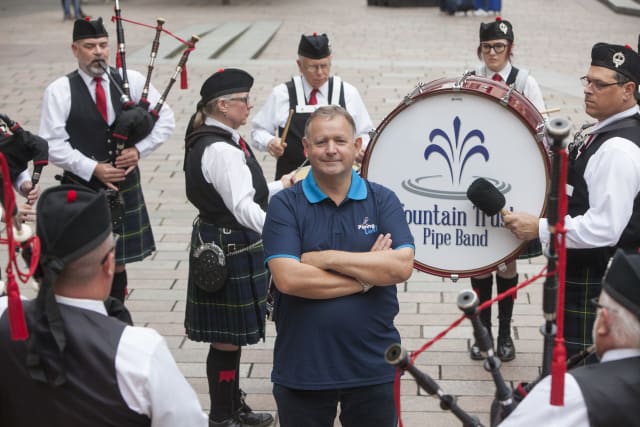 Musicians from around the world have arrived in Scotland for an annual piping competition and festival.

The Piping Live! Glasgow International Piping Festival was opened by the US Fountain Trust Pipe Band who travelled over 3,600 miles from Ohio to take part as they celebrate their 20th anniversary.

The festival and World Pipe Band Championships will see more than 8,000 musicians and more than 200 bands - from countries including New Zealand, Australia, Canada and South Africa - perform in Glasgow.

After a performance by Fountain Trust Pipe Band on Buchanan Street they joined the Piping Live! Big Band - a 120-strong group of pipers and drummers - who marched from Blythswood Square to the City Chambers in aid of the Scottish Association for Mental Health (SAMH).

Organisers expect crowds of over 40,000 to attend piping events from August 13 to 19.

Director Roddy McLeod said: "Piping Live! is one of the biggest events in Scotland's cultural calendar and we're thrilled to be celebrating our 15th year with such a stellar line-up, including the Fountain Trust Pipe Band, who are joining us for the first time.

"We've got a fun filled week of entertainment and activities for everyone, with headline performances from trad heavyweights and first-time performers to the fiercely contested Masters Solo Piping Competition and our come and try sessions at The National Piping Centre.

"We've also added new events to our programme this year, such as the Ceòl nam Pìobairean, a celebration of the music of the highlands at Drygate."

"It's our first time in Scotland and to be here to participate in an event of this calibre is a huge honour," he said.

"It's definitely worth travelling across the world for - I'm sure it'll be a festival to remember."

Glasgow Lord Provost Eva Bolander said: "Glasgow comes alive to the sound of the bagpipes when Piping Live gets underway bringing top class musicians to the city to perform.

"It is a chance to experience unique and spellbinding music that will build memories that last a lifetime. Many of the people performing are under 25 and this event, along with the World Pipe Band Championships, cements Glasgow's reputation as the World's capital of piping."

Corbyn allies call for unity in Labour Party after suspension

Protesters clash with police over Covid-19 restrictions in Barcelona