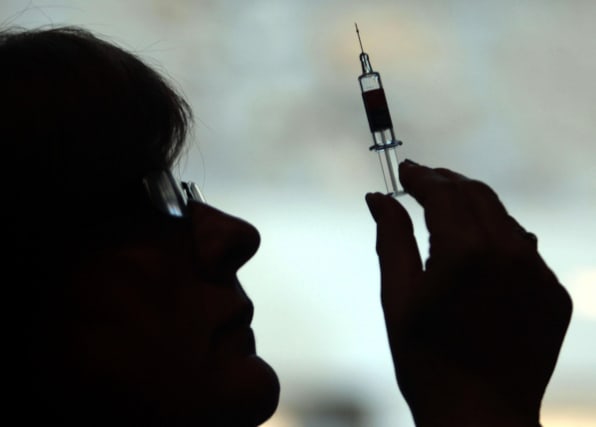 A marker in the blood could help detect kidney cancer early, scientists have said.

Measuring levels of protein molecule KIM-1 may indicate whether someone is more likely to develop the disease over the next five years, according to research published in journal Clinical Cancer Research.

The international team of scientists said the biomarker is a "promising candidate" to assist with the early detection of renal cell carcinoma, the most common type of kidney cancer.

The researchers, supported by organisations including Cancer Research UK, examined the blood of 190 people who went on to develop kidney cancer and 190 people who did not.

The greater the concentration of KIM-1, the higher the person's risk of developing the disease, they found.

People with the lowest level of KIM-1 had a 0.2% predicted risk of kidney cancer over five years, compared with a risk of up to 1.4% among those with the highest levels.

The research also found that among people with kidney cancer, those with the highest levels of the protein in their blood were less likely to survive.

The scientists said the biomarker could be used in the future alongside imaging techniques to help diagnose kidney cancer early, or rule out the disease.

Dr David Muller, co-author of the study from Imperial College London, said: "This work is a big step forward.

"KIM-1 is the only blood biomarker shown prospectively to distinguish between people at high and low risk of kidney cancer.

"But there's a lot more work to do before we could envisage this in the clinic.

"The next steps are to look more closely at whether KIM-1 levels can help detect tumours that have a good prognosis, so those at an early stage, and to find out if it could be used as a tool to track whether a patient's treatment is working."

Kidney cancer is the seventh most common cancer in the UK.

More than eight in 10 people will survive the disease for five years or longer when it is diagnosed at its earliest stage, Cancer Research UK said.

However, around four in 10 cases in England are diagnosed at a late stage.

Professor Charles Swanton, chief clinician at Cancer Research UK, said: "The potential of blood tests for the detection and monitoring of cancers is becoming increasingly apparent, and this work offers further evidence that they could become powerful tools in the clinic.

"There is a pressing need to shift kidney cancer diagnoses towards earlier stages, when treatment is more likely to be successful, and this promising research is progress towards that goal.

"This work is still in early stages, so prospective studies of larger populations are needed before this approach could be widely adopted."