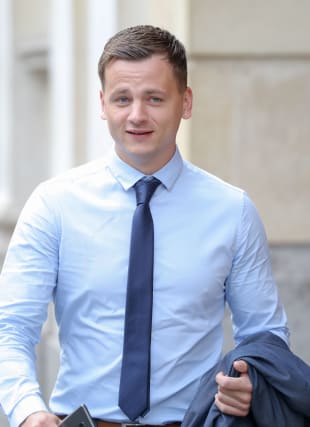 The jury in the Ben Stokes trial has been directed by a judge to find defendant Ryan Hale not guilty of affray.

Judge Peter Blair QC, the Recorder of Bristol, ruled that there was insufficient evidence against Mr Hale, 27, in the case.

Mr Hale told police he was an "innocent bystander" when he was "smacked about the place" by Stokes after leaving the Mbargo nightclub in the early hours of September 25 last year.

The jury of six men and six women were told Mr Hale went to fetch a metal pole after being knocked unconscious by Stokes.

Judge Blair told jurors that he had considered whether they would be able to find that Mr Hale "used or threatened unlawful violence".

"There hasn't been any evidence whatsoever that he did so," the judge told them.

"The next thing you see him doing is taking his t-shirt off and putting it under the head of Ryan Ali, who has been knocked senseless to the road surface.

"I have come to the conclusion that I should exercise my responsibility of directing you that there is no case to answer against Ryan Hale, the third defendant.

"Upon analysis of the evidence, in terms of what the law would require to be proven, I have come to the conclusion that you cannot properly convict him of the charge of affray."

The court clerk directed Mr Hale to stand and asked the jury foreman: "Do you find him not guilty?"

Mr Hale then left the court room with his barrister, Stephen Mooney.