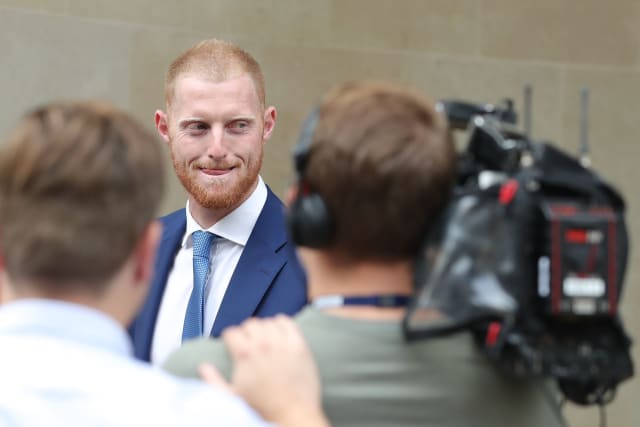 England cricketer Ben Stokes has begun giving evidence in his trial for affray, telling jurors he had drunk beer and later vodka and lemonade before the incident.

Stokes, 27, is accused of knocking out two friends, Ryan Hale, 27, and Ryan Ali, 28, during an alleged dispute near a nightclub in the Clifton Triangle area of Bristol on September 25 last year.

The all-rounder, who plays for Durham, is standing trial at Bristol Crown Court jointly accused of affray alongside Ali.

Co-accused Hale was found not guilty of the same charge by the jury on the direction of the judge.

Stokes, who was wearing a blue suit, white shirt and blue tie, swore on the Bible before starting his evidence and told the jury he had gone out with teammates after England had beaten the West Indies in a one-day international in the city.

He said after the match he would have had a beer at the ground before driving back to the team hotel for a meal with his wife Clare and other players and partners where he would have drunk two or three pints of lager.

Gordon Cole QC, representing Stokes, asked him: "Were you drunk?"

He said the group went into the nightclub where he drank five or six vodka and lemonades.

After while they all left, except Mr Plunkett and Mr Bairstow who remained inside, and went to the Pryzm nightclub instead.

Mr Cole exhibited a photograph of Stokes with Mr Anderson, Mr Ball and Mr Hales taken outside Pryzm, which appears to show him looking angry.

Asked about it, Stokes described his face as a "pretty stupid face".

Mr Cole said: "There might be a suggestion that this photograph suggests your demeanour. Where you in a bad mood?"

Stokes said he would only have had one or two more vodka and lemonades to drink because he and Mr Hales had decided to leave after just 45 minutes and return to Mbargo, leaving Mr Anderson and Mr Ball together.

Stokes said that Pryzm was quiet, so they caught a taxi back to Mbargo.

"We really enjoyed ourselves in there before and thought it was the best place to go back to," he said.

He told the jury that he did not know whether Mr Bairstow and Mr Plunkett would still be inside.

Earlier Mr Cole asked Stokes to show the jury his right hand and wrist and explain why he asked the officer who arrested him to loosen the handcuff.

"My right index finger has been this way since 2011. It was a cricketing injury," he said.

Stokes said he had undergone five or six operations on his right-hand following cricket injuries.

Before Stokes began giving evidence, the jurors heard Mr Hale tell detectives in an interview that the cricketer could "could have killed" him when he knocked him unconscious.

He told officers: "I had a constant headache which I'm probably going to go and get checked out again.

"It's the emotions of it all. The fact I've been attacked. Watching the video was shocking.

"I'm a dad. He could have killed me. I don't know why he didn't stop. You hear about it all the time - he could have.

"Just the way he was acting in the video, he could have beaten the living hell out of me. It's shocking to see someone doing that to someone who didn't do anything wrong.

"It's quite shocking to think that I've been put in a situation like that."

Stokes, of Stockton Road, Castle Eden, Durham and Ali, of Forest Road, Bristol each deny a charge of affray.