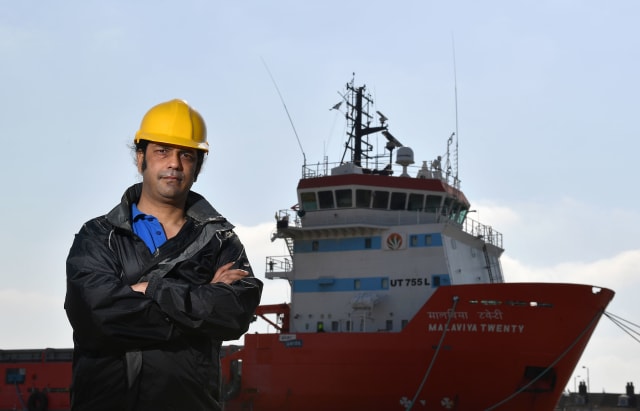 An Indian sailor who was stranded aboard a ship moored at Great Yarmouth for 18 months is preparing to return home after a legal stalemate was broken.

Nikesh Rastogi, 43, is the captain of the offshore supply vessel Malaviya Twenty, whose owners fell into liquidation, leading to a complex series of legal disputes around unpaid crew wages and port dues.

He said he and his three crew members had received no wages since last year and had feared they would not get paid if they left the ship as it would be "considered a derelict which means anybody can take it over".

Lawyers acting for the crew made representations to the Admiralty Marshal at the High Court in July and the ship has now been arrested, meaning the court can arrange its sale and use the money raised to pay those owed.

Capt Rastogi, from Mumbai, said he hopes to take a flight home with his crew within weeks.

"It is like a weight being lifted because there was a point of no hope," he said. "There was a period where things were really bad mentally."

Paul Haworth, a director at the law firm Birketts which represented the crew, said a surveyor instructed by the court will value the ship and the sale process should conclude in September.

Paul Keenan, inspector with the International Transport Workers' Federation, said the ship could sell for £700,000 to £800,000.

Mr Haworth said this should be enough to pay those involved in the wrangle, including the Admiralty Marshal's costs, port dues, the crew's unpaid wages and lawyers.

He said a court order would be needed to sell the ship for less than its valuation price.

The Malaviya Twenty has been in Great Yarmouth since June 2016.

Capt Rastogi said he was contracted by an agency in February 2017 as part of a 13-strong replacement crew, after the ship's owners fell into liquidation.

All of his original crew returned to India last year, and three new crew members joined him in September 2017 on six-month contracts.

Capt Rastogi said his employers withdrew in January 2018 after new contracts failed to materialise, and that he and his crewmates have not been paid since last year.

He said the situation had been difficult but he felt responsible for his crew, adding "you can't sit and mope over it, you just slide into the role".

The crew spent much of their time doing routine maintenance and performing drills and kept in touch with family at home on WhatsApp.

Capt Rastogi said they looked out for "markers for depression" and he read books to keep busy.

"Your mind needs to be like a shark in that sense because if you stop then you sink and you start thinking about the situation and then there's no hope," he said.

He said he would continue to work at sea after the ordeal, adding "lightning doesn't strike twice".

Asked about his plans when he returned home, he said: "I think I'm going to have lots of Indian food.

"I'm going to start with curries from breakfast to dinner."