Thunderstorm warnings issued as heatwave comes to an end

Thunderstorm warnings have been issued as the heatwave which has gripped the south east comes to an end.

The Met Office has issued a yellow weather alert, warning the storms are likely to affect parts of east and southeast England from Tuesday evening into the early hours of Wednesday. 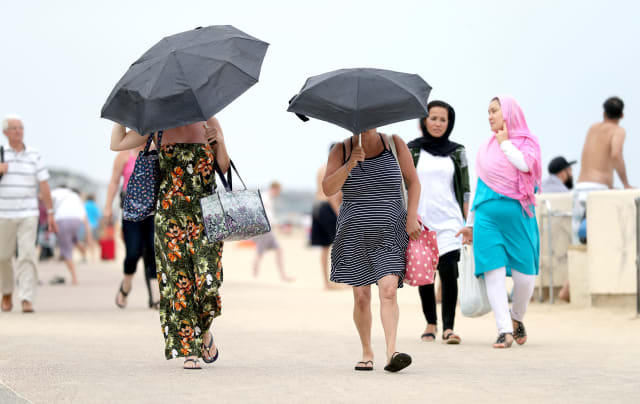 It states that frequent lightning may occur along with heavy rain - up to 20mm to 30 mm of rain in an hour - in some places, with large hail and sudden strong gusts of wind.

The forecast has prompted Ryanair to cancel at least 14 departures and 13 arrivals at Stansted Airport.

In a statement on its website, the airline said: "We apologise for any inconvenience caused by this weather disruption, which is entirely beyond our control, and we are working hard to minimise the disruption to our operations."

Frank Saunders, chief meteorologist at the Met Office, said: "After weeks of predominantly high temperatures and very little rainfall for many parts of the country, high pressure is finally breaking down allowing a cold front to introduce cooler, fresher air from the Atlantic to all parts of the UK.

"Temperatures will still often be in the low to mid-20s Celsius in eastern parts of England for the rest of this week, which although is above average for the time of year, will be notably cooler than recent weeks.

"Elsewhere, temperatures in Scotland, Northern Ireland, Wales and western England will be closer to average, the high teens being typical."

However, after a sweltering hot summer, the UK could see warmer-than-average temperatures in the autumn, according to the Met Office.

Its three-month outlook does not suggest the hot weather will last that long but it may be "warmer than average".

The outlook - used by planners, businesses and government to start plotting weather-related decisions - shows an increased chance of high-pressure systems close to the UK, meaning settled conditions are more likely than unsettled weather from our typical Atlantic weather systems.