Theresa May piles pressure on Boris to apologise for burka comments 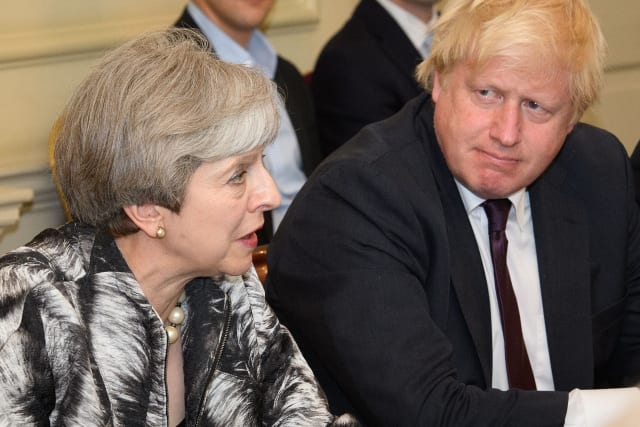 The Prime Minister has added her voice to calls for Boris Johnson to apologise for his comments about burkas.

Now, Theresa May has said she agrees with Mr Lewis, upping the pressure on Mr Johnson, who has so far refused to apologise and dismissed his critics as "ridiculous".

She said: "I do think that we all have to be very careful about the language and terms we use.

"And some of the terms Boris used describing people's appearance obviously have offended. So I agree with Brandon Lewis.

"What's important is do we believe people should have the right to practise their religion and, in the case of women and the burka and niqab, to choose how they dress.

"I believe women should be able to choose how they dress."

But an apology would not go far enough, said Labour's Naz Shah, shadow equalities minister, who accused the Prime Minister of being in denial about Islamophobia.

The Bradford West MP tweeted: "Boris Johnson's comments were not just offensive, they were Islamophobic but the Prime Minister is in denial.

"An apology is not enough, she needs to order an independent inquiry into Islamophobia in her party, as requested by the Muslim community, and take action against him."

A source close to Mr Johnson made clear he was not retracting his comments.

"It is ridiculous that these views are being attacked - we must not fall into the trap of shutting down the debate on difficult issues," said the source.

"We have to call it out. If we fail to speak up for liberal values then we are simply yielding ground to reactionaries and extremists."

Writing in the Daily Telegraph on Monday, Mr Johnson said he did not want Britain to follow European countries like Denmark which have banned the burka and niqab in public places.

But he described the burka as "ridiculous" and "weird" and said women wearing them looked like letter-boxes or bank robbers.

Mr Burt, who served under Mr Johnson until his resignation as foreign secretary last month, told BBC Radio 4's Today programme: "I would never have made such a comment, I think there is a degree of offence in that, absolutely right."

And Lady Warsi accused Mr Johnson of adopting the "dog-whistle" tactics of former Donald Trump aide Steve Bannon in the hope of attracting support from right-wing Tories for an eventual leadership bid.

Repeating her call for an independent inquiry into Islamophobia in the Conservative Party, Lady Warsi told Channel 4 News: "Muslim women should not be a useful political battleground for Old Etonians.

"It is crass and it must stop, and it must be condemned by the leadership right from the Prime Minister down."

Mr Johnson has long campaigned for equal treatment for women in developing countries, especially the provision of education for girls.

His article stated that there was no requirement in the Koran for women to cover their faces, and attacked "bullying (and) oppressive" male-dominated governments which tried to force them to do so.

But in a message on Twitter, Mr Lewis said: "I agree with Alistair Burt. I have asked Boris Johnson to apologise."

The Muslim Council of Britain said Mr Johnson's "intentional usage of the words" contained in his Daily Telegraph column appeared to be an attempt to "pander to the far right".

The MCB said Tories must now deliver the independent inquiry into Islamophobia in the party which it has been demanding. And it said that any inquiry must look into Mr Johnson's previous "incendiary remarks" that "Islam is the problem" and that "Islamophobia was a natural reaction".

The council also asked if Tory MP Nadine Dorries, who backed a ban on the burka, would be spoken to by the party chairman.

Mr Johnson's father, Stanley, came to his defence, telling ITV1's Good Morning Britain: "I think we are just picking holes here. I think people are whipping up a little mountain out of a molehill on this one, I really do."

And Ms Dorries said the former foreign secretary "did not go far enough".

"Any clothing a woman is forced to wear which hides both her beauty and her bruises should be banned and have no place in our liberal, progressive country," she said.

Shadow chancellor John McDonnell called for a campaign of resistance against the rise of the far-right, along the lines of the Anti-Nazi League.