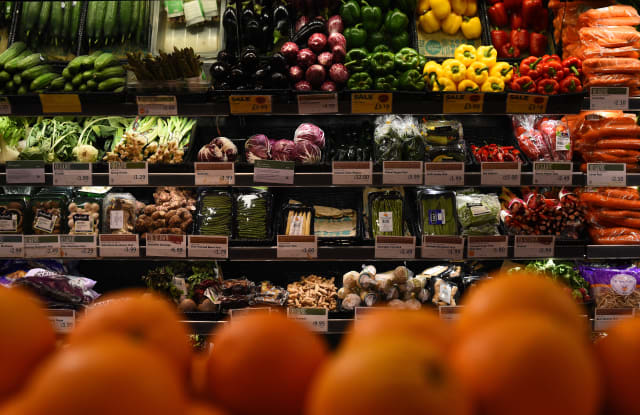 The price of some supermarket fruit and vegetables has gone up as the effects of the heatwave combined with the cold spring flow through to shop shelves.

The average supermarket price of broccoli is up 25.8% per kilo year on year to £1.54, figures reported by The Grocer from analysts Brandview show, after growers warned that high temperatures meant brassica heads had stopped growing.

A kilo bag of own-label carrots is also 8.3% more expensive than last year at 65p on average, while a pack of three large onions is 3.5% pricier at 75p.

The UK has seen its driest first half of summer since 1961 and farmers have warned that the ongoing hot, dry conditions have hit crops.

Salad has also been affected by price hikes, with an iceberg lettuce now 52p on average in the major supermarkets, up from 49p at this time last year, while a pack of two Little Gem lettuces is 4.6% more expensive at 75p, the trade publication reported.

The weather has also affected potato crops in the UK, but supermarket prices are down on last year, with a 2.5kg bag of white potatoes now 5p cheaper year on year at £1.38 on average and a 2.5kg bag of Maris Piper potatoes down 5% to £1.83.

The Agriculture and Horticulture Development Board (AHDB) estimates that the total area in Great Britain planted with potatoes is down 3% on last year - the third-lowest figure on record.

AHDB's sector strategy director for potatoes, Dr Rob Clayton, said: "This has been a tough and stressful season for growers, we do not under-estimate that.

"However, we welcome news that supply chains are working closer than ever before, and that continual improvements are leading to reduced food waste at all points from the grower to the consumer.

"The season started with sub-zero temperatures brought by the Beast from the East, followed by a wet spring that delayed planting. Since then, we've seen one of the driest combined June and July periods on record, so most growers are reporting that yields will be down."

A pack of five Braeburn apples is 3p more expensive than last summer at £1.32 and a 400g punnet of strawberries is up by 3p to £1.91, The Grocer reported.

UK food inflation accelerated to 1.6% in July from the 1.2% rate seen during May and June, according to the latest BRC (British Retail Consortium)-Nielsen Shop Price Index released last week, with fresh food inflation up from 0.8% in June to 1.2% last month.

The BRC said the increase in food inflation, which particularly affected vegetables and fruit, was the result of a cold spring and the current prolonged dry period, adding that "the hot, dry conditions we have seen across the northern hemisphere means the pressure on prices will continue for some time to come".

Rachel Lund, head of insight and analytics at the BRC, said: "At this time of year, a lot of fresh food we eat comes from the UK. The hot weather has reduced yields in fruit and vegetables particularly.

"We're starting to see some upward pressure on prices."

But she added: "I don't think it's anything to be too alarmed about from a consumer perspective.

"Fresh food inflation is not high by historic standards and is certainly below the highs we saw last year when currency changes affected prices, and retailers will try to pass as little of the cost on to consumers, by mitigating increases within their own business."