The Duke of Sussex has assumed wedding duties once again - this time attending the nuptials of his childhood friend as best man. 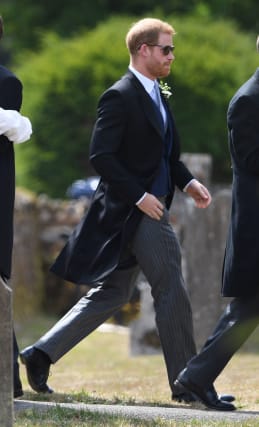 Harry, who was star of the show just weeks ago, stayed low-key in morning dress and sunglasses as he accompanied Charlie van Straubenzee into St Mary the Virgin Church in Frensham, Surrey.

He was dropped off at the church gates by bus along with a group of groomsmen.

The Duchess of Sussex, celebrating her 37th birthday on Saturday, attended separately and waved to crowds of well-wishers as she entered.

Meghan, who wore a navy fit-and-flare dress and matching hat, chatted to guests outside the church before the service got under way at 3.30pm.

Harry and Mr van Straubenzee are said to have struck up a close friendship as the groom, 30, and the royal attended Ludgrove School in Berkshire together.

The groom played a major part in Harry's wedding in May as an usher, along with his older brother, Thomas, and was said to have roasted the royal in a humorous reception speech.

Charlie's older brother, Thomas, is close friends with the Duke of Cambridge and is godfather to Princess Charlotte, three.

Guests clad in summery outfits and morning coats began filing into the church as wedding bells rang one hour before the ceremony began.

Well-wishers lined the sun-drenched street in front of the church to catch a glimpse of the royals and the marrying couple.

The bride arrived in a vintage car shortly before 3.30pm.

Hymns including Shine Jesus Shine and Lord Of All Hopefulness could be heard from outside.