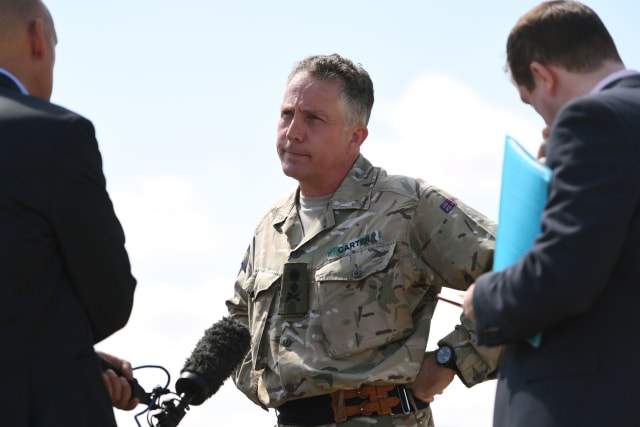 Sinn Fein has criticised a vow by the new head of the armed forces to stamp on bogus claims against Troubles veterans as "extremely insulting".

Taking up the top post, the new head of the armed forces praised the "remarkable job" done by the British Army in Northern Ireland and said groundless allegations against soldiers risked undermining the Army's fighting spirit.

Chief of the Defence Staff General Sir Nick Carter spoke out about Northern Ireland veterans being "chased by people making vexatious claims" of wrongdoing, vowing: "That will not happen on my watch."

Speaking at a media briefing at RAF Coningsby in Lincolnshire, Sir Nick said: "It is right and proper that if our soldiers have done something wrong then they should clearly be investigated.

"But only if they have done something wrong.

"What is fundamentally wrong though is if they're chased by people who are making vexatious claims - and that will not happen on my watch. Absolutely not."

She also challenged Sir Nick to meet with families who have made claims over the actions of soldiers.

"I would call on the British Chief of the Defence Staff to provide evidence of any such 'vexatious claims'," Ms Dillon said.

"These comments are extremely insulting and will provide further hurt to families and victims of the conflict, some of whom have waited over 40 years for closure by way of an Article 2 investigation or inquest or the timely provision of disclosure in relation to the circumstances surrounding the death of their loved ones.

"During the conflict, state forces operated with impunity and we will resist any attempt to legalise this policy, which constituted an integral aspect of the British government's sustained abuse of the human rights of Irish citizens both during and after the conflict."

"I welcome General Sir Nick Carter's statement that 'It is right and proper that if our soldiers have done something wrong then they should clearly be investigated'," he said.

"There will also be a welcome for General Sir Nick Carter's assertion that 'what is fundamentally wrong though is if they're chased by people who are making vexatious claims - and that will not happen on my watch'.

"The position we start from in Northern Ireland is one of imbalance. Terrorists have been able to avail of early release from prison, royal prerogatives of mercy or royal pardons, and over 200 'letters of comfort' by the Blair government.

"Too many people have lost sight of the fact that 99% of victims during the Troubles were due to terrorist action, and just 1% of the 47,000 victims were due to the police or army. And unlike the security forces, every terrorist act was premeditated with unlawful death the intended outcome."

Sir Nick's comments came after his predecessor said he was "deeply uncomfortable" at the prospect of veterans facing investigation for actions which occurred during the Troubles.

Air Chief Marshal Sir Stuart Peach, who stepped down as Chief of the Defence Staff in June, said it was a political decision as to whether there should be a statute of limitations on inquiries into past events.

But he made clear that he was concerned at the way such investigations could play out.

A consultation document issued by Northern Ireland Secretary Karen Bradley on dealing with the legacy of the Troubles does not include provision for a statute of limitations, to the anger of many Conservative MPs.

But Defence Secretary Gavin Williamson has pledged to look at "all options" to protect veterans from legacy investigations amid fears Second World War campaign survivors could be targeted.

Sir Nick said service personnel facing investigation would receive as much help as they needed.

He continued: "The point I'd make is that we as an institution ... are absolutely going to look after those people who are being investigated this way, to the best of our ability.

"A lot of people have got a lot of opinions about that and that's part of the consultation - and I think it would be wrong for me to prejudge which direction it went in.

"I think it is sad this is happening.

Writing in The Daily Telegraph, Ms Bradley warned that implementing a statute of limitations could let terrorists off the hook.

She said: "Some have called for a statute of limitations for veterans, but we believe that is not legally possible without extending it to the terrorists - something this Government could not support."

The minister hit out at attempts by some to "rewrite the history of the Troubles to justify terrorism" and warned investigators of unsolved killings, including murders of soldiers, that they are legally obliged to act in a fair, balanced and proportionate way.

Ms Bradley said she understood concerns over the treatment of veterans "in what some see as the apparently disproportionate focus on their actions rather than those of the terrorists".

"We should never forget that 90% of the killings were carried out by terrorists and just 10% by those acting on behalf of the state - almost all of the latter lawfully," she said.