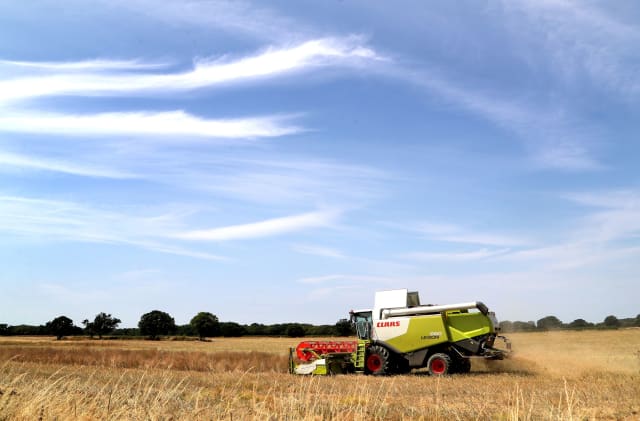 Farmers struggling in the hot, dry conditions have welcomed moves to give them more flexibility on taking water out of the environment.

They have also called for support to help transport animal fodder across the country to where a lack of grass in parched fields is putting pressure and costs on livestock farmers.

The move by the Environment Agency will make it easier to trade water allowances between farmers to maximise supplies and help them make the most of extra water in rivers after heavy rain.

The Environment Agency may also allow farmers to take additional water on an emergency basis if there is a real or imminent threat to crops and livestock, officials said.

But cases will be assessed to minimise the impact on the environment and other water users.

The Environment Agency announced the changes after the National Farmers' Union (NFU) met Government officials in London on Wednesday to discuss tinderbox conditions that have reduced grass growth and depleted yields.

The UK has seen its driest first half of summer since 1961, with last Thursday and Friday bringing the first rainfall in weeks, and farmers have warned the ongoing hot, dry conditions have hit crops.

Paul Hickey, head of water resources at the agency, said farmers are facing considerable pressures in light of the drought conditions, and there is a need to support them to safeguard food production and animal welfare.

NFU president Minette Batters said: "The abstraction is really welcome for our growers, we look at field crops, potatoes, all of these people are on contracts to supply so they need to be able to supply and they need to fulfil that requirement."

Ms Batters also warned that livestock farmers are facing a lack of fodder, and where there are available supplies, costs are going through the roof, which is "pretty terrifying".

Feeding dairy herds is going to cost an extra £60,000 per dairy farming business, she said.

"That's massive, that will be more than the profit for the businesses," she warned.

She also said there are challenges in transporting fodder across the country to where it is needed.

The NFU has asked Environment Secretary Michael Gove, who attended the meeting, to follow the lead of other European countries which are putting state aid funding in place to support transport costs.

Ms Batters described the conditions as "unprecedented" in her farming lifetime.

She added: "It's been highlighted how important it is to plan for the future and use Brexit to put long-term thinking into place to make sure we are protecting our water supply and enhancing the availability of it."

NFU director-general Terry Jones said the organisation has been pushing for changes to the fiscal rules to incentivise farmers to create winter storage reservoirs to harvest water when it was abundant.

Country Land and Business Association president Tim Breitmeyer said it is "vital" to relax the rules on water abstraction, and also called for early subsidy payments to help with cash-flow issues during the heatwave.

He added: "One solution to ease this drought situation which could potentially increase year-on-year due to climate change, is to focus on long-term water management.

"We need investment now to secure future water supplies so that the impact of such extreme weather does not have a detrimental effect on food production and the environment over the next 50 years and more."