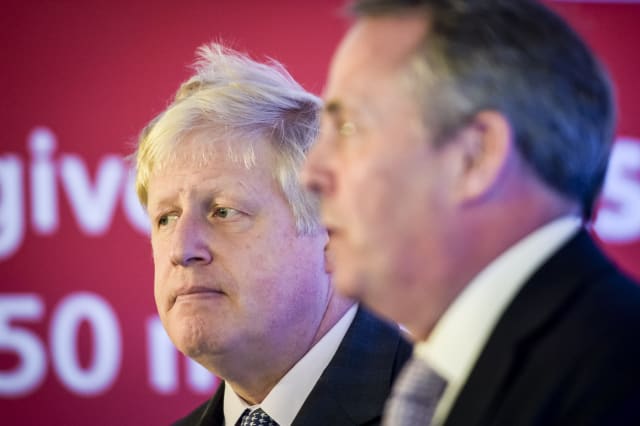 Brexit campaign group Vote Leave relied heavily on controversial messages featuring the NHS, immigration and Boris Johnson, according to a cache of Facebook adverts paid for by the campaign and released on Thursday.

Nine adverts were viewed between two and five million times out of hundreds paid for by Vote Leave, suggesting the group had paid significantly more to have the messaging appear more prominently in people's newsfeeds on Facebook.

Michael Moszynski, an expert in online advertising, said it was clear that those ads which were viewed the most had been the "priority of the messaging" which Vote Leave wanted "to expose to those audiences".

Five of the nine Vote Leave adverts which were viewed 2-5 million times focused on immigration.

Of those, two identical adverts stressed plans for Turkey to join the EU with an image showing a large red arrow sweeping across Europe from Turkey to the UK.

The accompanying text read: "The EU is expanding and plans on granting Turkey visa-free travel. This will put enormous pressure on the NHS, our border security and economy.

"Have we lost control? We already send £350 million to the EU every single week. Shouldn't we spend our money on our priorities instead? Vote Leave Day - Thursday 23 June. Is This Good News? Click No! Vote Leave."

At the time, negotiations for Turkey to join the EU had completed one of 35 'chapters' of legislation and as a member the UK would be able to veto any plans.

Jean-Claude Juncker, president of the European Commission, and Emmanuel Macron, president of France, have since strongly ruled out the possibility of Turkey joining the EU.

More than 30 other Vote Leave adverts, some viewed by between 500,000 and one million people, mentioned Turkey in the context of its border with Syria and Iraq. Again the images showed red arrows and figures pointing towards the UK.

"The EU is expanding and plans on granting Turkey visa-free travel making our new border Syria and Iraq!" reads the accompanying advert.

Another popular advert claimed more than five million "new immigrants" were heading to the UK.

The advert read: "Immigration is out of control and our NHS can barely cope as it is. If we stay in the EU we face an unprecedented migration of 5.23 MILLION new immigrants into the UK. WHEN WILL THIS STOP?

"Under EU law every EU citizen, including people from Turkey, will have unlimited access to the UK and our NHS. Let's vote to leave the EU on 23 June and take back control! Click to Save Our NHS! Vote Leave."

The figure of 5.23 million appears to be based on the highest possible projection of EU immigration to the UK by the Office for National Statistics at the time.

Three identical adverts which were seen by between two and five million people urged voters to "spend our money on our priorities like the NHS",  citing the disputed figure of £350 million per week sent to the EU.

The text read: "The UK sends over £350 million to the EU each week - that's enough to build a fully-staffed, brand new hospital every 7 days!

"Shouldn't we spend it on OUR PRIORITIES and NOT THEIRS? Take action and vote to leave the European Union on 23 June. Let's spend our money on our priorities. Act Now & Vote Leave! Vote Leave"

As one of the figureheads of the campaign, Boris Johnson featured heavily in many of the more widely-seen adverts.

The former London Mayor, who served almost two years as foreign secretary before his recent resignation over Brexit policy, was pictured in three of the nine adverts which were seen by 2-5 million people.

In two such adverts he is quoted talking about immigration, and in a third he is pictured in front of a Vote Leave lorry with a caption urging people to vote for Brexit.

The advert reads: "If you vote IN on 23 June, you are kissing goodbye permanently to control of immigration. You are voting for the current situation not only to continue but to get worse. - Boris Johnson.

"The British public support immigration but they want it controlled by those who they elect. They are generous but feel their generosity has been abused.

"They are right. On the 23 June they will get their chance to take back control. Click to Learn More! Vote Leave."

Vote Leave paid for significantly more Facebook advertisements around the EU referendum than the other campaign groups in the documents released today.

However, one advert from BeLeave published the week before the referendum was seen by more than five million people, more than any other adverts released by the Department for Digital, Culture, Media and Sport.

The advert read: "Being under EU rule is severely restricting our ability to grow and reach our full potential as a great nation. It is time we take a stand for Britain. Let's vote to leave the EU on 23 June so we can have a clear and prosperous future! BeLeave in Britain! BeLeave".