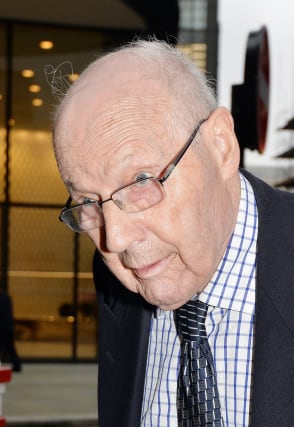 A decision to caution disgraced former bishop Peter Ball in 1993 was made despite no admission of an offence being given to the Crown Prosecution Service, the Independent Inquiry into Child Sexual Abuse (IICSA) heard.

The decision, eventually handed down by Gloucester police on advice from the CPS, was "wrong", admitted Gregor McGill, director of legal services at the CPS.

The disgraced ex-Bishop of Gloucester was cautioned in 1993 for gross indecency following allegations of sexual abuse.

Mr McGill, who gave evidence to the inquiry on Thursday, said that not all of the necessary conditions for a caution were met.

This included Ball having to make a "full and unequivocal" admission to the gross indecency offence - a condition set out in a letter sent to Ball's lawyers from the CPS.

But Mr McGill told IICSA counsel Fiona Scolding QC: "(The CPS) haven't seen anything. It may well be buried in amongst the papers."

Ball's lawyers accepted the caution in a letter sent back in March 1993, but did not make the required admission. Mr McGill, who was not involved in the first investigation, said he would have re-interviewed Ball on tape.

The CPS also claimed in 1993 that it had "substantial and reliable evidence" to prosecute Ball for indecent assault and gross indecency during the first investigation, but ultimately handed down the caution for one offence, a letter written to Ball's lawyers at the time showed.

Mr McGill told the inquiry that such claims were wrong and "confusing".

But he revealed that a case for actual bodily harm to one victim could have been brought against Ball in the 1990s.

He said: "I can't understand why there wasn't a consideration of actual bodily harm. On the face of it, there's evidence there in respect of two victims (that) could have founded a case of ABH, so I don't understand why it wasn't considered."

He said that the circumstances surrounding the 1993 decision, which referred to victim Neil Todd, "don't sit well" with a caution. The decision led to the shamed bishop resigning soon after.

The caution was also not administered in accordance with Home Office guidelines which said such a warning "will not be appropriate where a person does not make a clear and reliable admission of the offence".

The inquiry has heard how Ball protested his innocence when the 1992 allegations surfaced, and would describe victim Mr Todd as a "fantasist".

Ball, now 86, eventually went on trial and was jailed in 2015 after an investigation into sexual abuse allegations spanning some 30 years was reopened in 2012.

Mr Todd took his own life shortly before the 2012 investigation began.

Mr McGill said the CPS has been "on a journey" and is a "very different" organisation in 2018 compared to the one it was in the early 1990s.

He said: "We've been on a journey as to how we approach cases involving allegations of a sexual nature.

"We have become more inclusive. We listen to feedback, we engage with victims to understand the effect of this type of behaviour and we've tried to get our decision-making in a different place so we're not governed by myths and stereotypes about how particular victims may behave in certain circumstances."