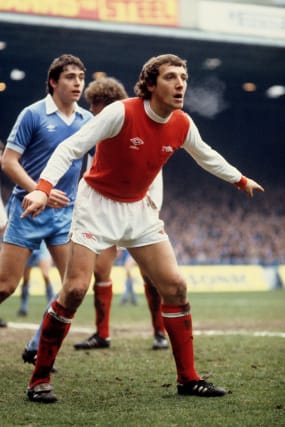 A former Northern Ireland international footballer and Arsenal star has been cleared of groping a pensioner on a bus after a boozy afternoon watching the Gunners play.

Samuel Nelson - known as Sammy - was accused of grabbing the woman between the legs on the evening of October 28 last year.

The 69-year-old was cleared of one count of sexual assault for the alleged incident on the packed park-and-ride bus from Brighton city centre.

Nelson, who now lives in Hove, asked the woman, who is in her seventies, whether she and her friends were on their way "back to the nursing home".

He then joked that the man he was with - his son Peter - was his carer and started chatting to the group about his career as a football player.

The complainant told Brighton Magistrates' Court she had been returning from a Beethoven concert at the Dome when Nelson touched her.

She said Nelson was "extremely smartly dressed - he had a trench coat on and really shiny shoes".

She claimed the former footballer groped her after they had been making small talk for a few minutes.

"All of a sudden this hand came down between my legs with some force around my pubic and vaginal area," she said.

"I was absolutely shocked and really angry and I said, 'If you do that again I will give you such a slap'.

"About 10 minutes later he did exactly the same thing again - I asked him to move away from me as he was invading my personal space."

She continued: "I was shocked and really, really angry that I was just standing on a bus and I was coming home from a lovely concert and this happened to me."

The complainant added that Nelson had also commented on the length of two other passengers' skirts, allegedly saying they "should lengthen them" in his presence.

The court was shown a clip of the bus ride during which Nelson apparently picks up the woman's hand and either kisses it or presses it to his face.

He then apparently nudges her with his elbow.

The complainant insisted that she had not held hands or even touched Nelson before the alleged assault, even though she was repeatedly shown the CCTV.

"I do not remember him taking my hand. I would not hold hands with a stranger - I do move my hands about when I talk," she said.

She denied assertions that Nelson had merely touched her hip, but admitted neither of her companions noticed the alleged assault.

She claimed that after the second alleged assault Nelson moved seats, although he did not appear to move on the CCTV footage.

The complainant denied only reporting the incident to the police after googling Nelson and his career.

When he was interviewed by police, Nelson accepted that it was him on the bus but said he could not really remember the incident.

He told the court he had spent the afternoon at the Emirates Stadium watching Arsenal's victory against Swansea City, had a few drinks and was probably in good spirits on the bus home.

"I strike up conversations - I find it easy to do that just to pass the time and tell a couple of jokes," he said.

He said he had probably made a couple of tongue-in-cheek comments about the age of the passengers on the bus, saying "it was just a bit of craic".

Nelson admitted he could be seen touching the complainant's hand in the CCTV footage but said he had no proper recollection of the journey itself.

He denied ever groping the complainant or of hearing her threatening to smack him and said the first he heard of the alleged sexual assault was on January 25 this year when he was interviewed by police.

Peter Nelson said he did not see anything untoward happen on the bus.

He said: "(My father) is a very sociable person so if someone strikes up a conversation with him he would be happy to sit there and chat with them."

He said he would have "intervened" if he had seen anything inappropriate.

Magistrate Dr Peter Sutton said the bench had been "initially impressed" with the complainant's evidence but said there were inconsistencies between her account and the CCTV footage.

"There is no evidence of the events as described by the complainant - she says she told you 'if you do that again I'll give you a smack' and that she then ceased to speak to the defendant.

"But the CCTV shows the conversation and laughter continues between the parties.

"She states that she told the defendant to move, which she said he did but the CCTV shows no evidence of him moving seats until he exits the bus a few stops later."

He said the prosecution had failed to prove the case beyond reasonable doubt.

At a previous hearing, Nelson admitted one count of assault by beating relating to pressing the complainant's hand to his mouth.

He was given an absolute discharge by magistrates for the offence, but ordered to pay £85 costs.

Belfast-born Nelson joined Arsenal at just 16 and turned professional at the age of 17.

He notched up 338 appearances for the Gunners and played in all three of their successive FA Cup finals between 1978 and 1980.

Nelson is ranked as Arsenal's 35th best player and is remembered for mooning the North Bank during a match against Coventry City - earning himself a two-week suspension.

He also bagged 51 international caps for Northern Ireland, including two during the 1982 World Cup.

In the early 1980s he spent two seasons with Brighton and Hove Albion before retiring from the sport and moving into business as a financial adviser.