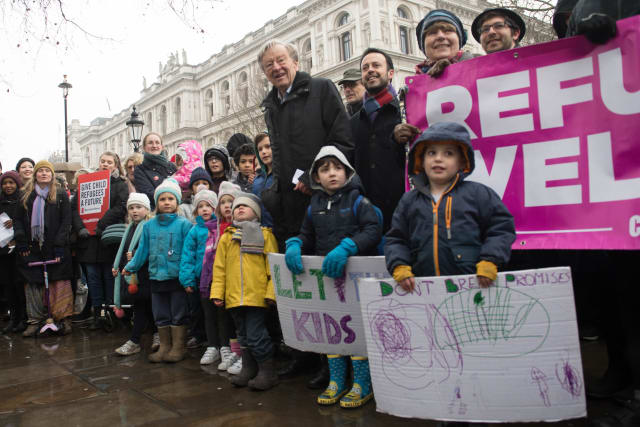 A challenge against the Government's plans to cap the number of child refugees allowed into the UK will be heard by senior judges.

The Help Refugees charity is bringing legal action over the Home Office's calculation that only 480 unaccompanied children should be accepted under an amendment moved by Labour peer Lord Dubs.

Last year the charity sought orders to force then Home Secretary Amber Rudd to abandon the cap and reopen what it said was a "defective" consultation process, so consideration could be given to allowing more children in.

But judges in London ruled against the charity in November, saying they were "not persuaded" its case was made out.

Help Refugees will challenge that decision at a Court of Appeal hearing on Wednesday and Thursday.

Lawyers for the charity will argue that the Government's consultation was "seriously defective" and does not accurately reflect the capacity of local authorities to accommodate child refugees.

The charity will challenge what it claims are "anomalies" in the way capacity was calculated, which resulted in just six local authority places being counted for the whole of Scotland and six for Wales.

It will also argue that access to justice was made "impossible" for most children who were refused relocation, because they were not given reasons.

Josie Naughton, chief executive and co-founder of Help Refugees, said: "The child refugee crisis has not gone away - there are, for example, nearly 4,000 unaccompanied refugee children in Greece right now, two thirds of whom are living in destitution, exposed to trafficking and other serious abuse.

"The slow pace of relocations has been shocking.

"There are children disappearing from camps and settlements in mainland Europe while local authority places offered for Dubs children remain unused."

Rosa Curling, a human rights solicitor from firm Leigh Day, who is representing the charity, said: "This is the single most important piece of legislation by which the UK has tried to help children caught up in the refugee crisis.

"Refugee children, living alone, in appalling conditions, are some of the most vulnerable people in Europe.

"A careful consultation, which did not miss or underestimate UK local authority capacity to support those children, was essential. It has yet to take place."

The Government previously defended the claim at the High Court, arguing there was no illegality in the consultation process.

The Dubs Amendment was to the 2016 Immigration Act and, from May last year, required the Home Secretary to make arrangements to relocate "a specified number" of vulnerable refugee children from Europe based on feedback from local authorities.

The Government increased the number of children to be relocated under the scheme from 350 to 480 in February last year.