Lawyers argue over format of Charles's evidence to abuse inquiry 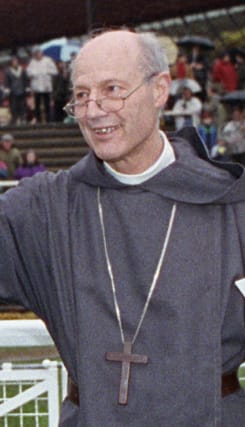 Lawyers for the Prince of Wales suggested he could not be compelled to give a statement regarding his friendship with a since disgraced bishop, an inquiry has heard.

The Independent Inquiry into Child Sexual Abuse is this week examining how abuse allegations against former Church of England bishop Peter Ball were handled.

Ball, jailed in 2015 for sexually abusing 18 young men over 30 years, previously boasted of his links to royalty and was said to be a confidant of Charles.

The heir to the throne's evidence to the inquiry, which was leaked to the media last week, will be read on Friday, in the form of a letter.

During Monday's hearing a lawyer for some of Ball's victims said his clients were surprised and concerned at the format of the evidence.

Richard Scorer said: "We wish to register our surprise and concern that the prince has chosen to put his evidence to the inquiry in the form of a letter as opposed to a witness statement verified by a statement of truth in the normal way that survivors giving evidence to this inquiry have done."

Mr Scorer said concerns around Charles' letter include that it may be "less than entirely frank about his personal relationship with Peter Ball and that it contains matters to which he is reluctant to attach a formal statement of truth".

A formal statement of truth is essentially equivalent to swearing on oath.

The final sentence of Charles' letter, which makes clear that the information within it is true, is considered by the inquiry to comply with the requirements of a statement of truth, Monday's hearing was told.

Counsel to the inquiry Fiona Scolding said there had been "lengthy and extensive correspondence" between Charles's lawyers and the inquiry.

She explained that a witness statement bearing a statement of truth had been required from Charles, but said his lawyers had asserted that the inquiry's requests for evidence were "outside its powers".

Ms Scolding said submissions from his lawyers included a suggestion that the inquiry had no power to compel him to make a statement and that the inquiry was requesting his personal data which was "intensely private and confidential".

She said the inquiry did not "accept the contention that the prince should be treated in a way that was different from any other witness".

Following discussions, she said agreement was reached on the prince providing a statement and added that the signed letter was deemed to cover all the topics the inquiry wanted to address.

Earlier she dismissed a suggestion a source had made to the Times newspaper that the timing of the statement at the end of the week was deliberate to prevent Charles being called for cross examination.

She said this "could not be further from the truth".

She said: "There is no requirement for him (Charles) to attend in person as his evidence, whilst important, is not of central relevance to many of the issues raised by this case study."

Ball accepted a caution for one count of gross indecency in 1993 and resigned due to ill health.

It was reported last week that Charles' statement will say he was not aware of the "significance" of the caution when Ball mentioned it in a letter in 2009, and that he did not know until recently that a caution carries an acceptance of guilt.

He added: "The Crown prosecutes people in this country every day on the principle that ignorance of the law is no defence.

"Yet seemingly this is the defence that the monarch-in-waiting seeks to rely on here."

Now aged 86, Ball, the former bishop of Lewes and then Gloucester, was released in February last year after serving half his 2015 sentence behind bars.

At the beginning of Monday's hearing inquiry chairwoman Professor Alexis Jay said the leaking of Charles' statement would be investigated, describing it as a "very serious breach of confidence by someone with direct access to information in this investigation".

It has been reported that Charles' statement will say he was "deceived" by Ball and that he was unaware of the true nature of the clergyman's behaviour until more than 20 years after allegations first surfaced.

Opening the hearing in central London on Monday Ms Scolding said of Ball: "His fall from grace was a huge shock to the church.

"He was a very senior clergyman with enormous spiritual authority. He also had power and charm."

She said that power had been "further enhanced by his cultivation of influential friends both within and outside the church".

"He did not stint from mentioning those friends in prominent places when he thought it would assist his cause," she added.