Swimmers must be aware of drowning risk, say council leaders 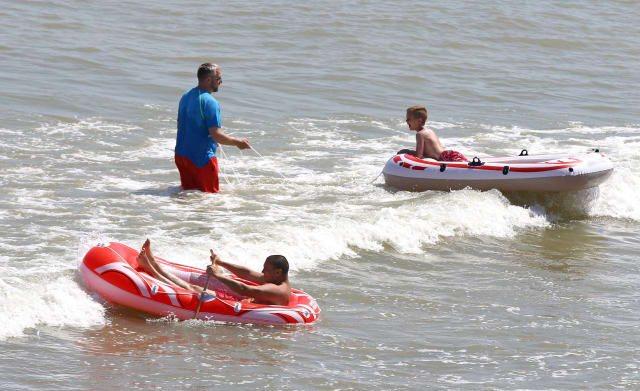 Swimmers should take care when taking a dip in the water during the hot weather, after several people drowned while swimming over the past few weeks, council leaders have warned.

Last year 255 people died as a result of accidental drowning, including seven children under the age of nine.

The Local Government Association (LGA), which represents 370 councils in England and Wales, said with more people likely to be out near water during one of the longest spells of hot weather for many years, the public needs to be vigilant to the dangers of drowning, especially parents with children.

It said casual swimmers particularly need to be aware of the risk of cold water shock, which is one of the biggest causes of drowning.

Even strong and confident swimmers can struggle and drown after jumping into cold and unpredictable seas, rivers, canals and lakes where temperatures can be as low as 15C in the summer - half that of swimming pools which are typically heated to around 30C.

Councillor Simon Blackburn, chairman of the LGA's Safer and Stronger Communities Board, said: "The recent deaths of those who have drowned are an absolute tragedy and the numbers who die every year from drowning are shocking.

"Councils want to make sure everyone is safe around water, which is why we are urging people to follow our advice to be careful and vigilant to the dangers.

"Many people will be tempted to cool off in the water during the hot weather, but even the strongest of swimmers need to be aware of the risks of drowning and cold water shock. What might look like a safe place to take a dip or have a swim could in fact be a danger.

"Our advice is always to swim in water that is clearly marked as safe and under the control of a lifeguard. Swimming in unknown water could lead to tragic consequences."

Rain is forecast for much of the UK on Friday, but temperatures are set to remain in the high-20s across southern parts and could climb even higher going into the weekend.

The Met Office has said Britain could see a record-breaking summer if temperatures stay above average.