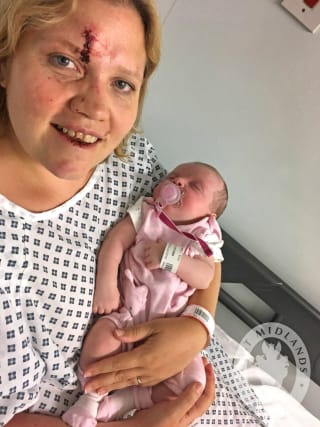 A mother who was run over as she tried to stop carjackers driving off with her four-week-old daughter has said the men risked the infant's life for personal greed.

Clare O'Neill has now been discharged from hospital after treatment for facial injuries, and has been left with a broken tooth and severe pain in her right arm.

Her baby Eliza was found safe and well by an ambulance crew at a health centre in Small Heath, Birmingham, on Thursday - 45 minutes after two men drove off with her mother's Audi A3.

In a statement issued by West Midlands Police, Mrs O'Neill said: "I am still extremely shaken about what has happened and we, as a family are still trying to come to terms with what has happened.

"Eliza is thankfully safe and well, but the people responsible clearly knew she was in my car when it was taken, putting the life of our four-week-old baby at risk as a result of their personal greed.

"I have now been discharged from hospital and have sustained facial injuries, which include bruising, a broken tooth and severe pain to my right arm.

"This was caused by the wheel of my car running me over whilst I battled to stop my daughter being taken. Due to the injury to my arm I am now unable to hold Eliza for the next four or so weeks.

"I am appealing for people to come forward with any information about who is responsible or behind this, the life of my daughter was endangered by the reckless behaviour of those involved. Please come forward and assist the police with their enquiries.

Mrs O'Neill's car was stolen after she arrived home in Birmingham with Eliza in a baby carrier on the back seat.

As Mrs O'Neill, 39, desperately tried to get her daughter out the vehicle, the callous thieves drove off, leaving her injured in the street just yards from her own front door.

A huge police operation swung into action involving dozens of specialist officers and a helicopter, in a bid to track the S-line Audi and Eliza.

The baby girl was still in her car seat when she was found, and was described by police as "blissfully unaware of the drama she had been involved in".

She was later reunited with her mother in hospital.

West Midlands Police, which has released a picture of mother and baby, is appealing to the public for information as detectives hunt for the two men.

Detective Inspector Jim Munro, of West Midlands Police, said: "This incident has shocked the whole of our force area and we will leave no stone unturned in our search for the offenders.

"We have a team of officers trawling through CCTV and speaking to residents in Marie Drive, as well as fast-tracking forensic analysis of the baby seat.

"We are asking anyone who may have seen the grey Audi A3 S-line with registration number BJ66 YLV since yesterday afternoon to contact us.

"We are delighted that mother and baby have been re-united and we wish Clare a speedy recovery."