2018 could be among 10 warmest, driest and sunniest summers 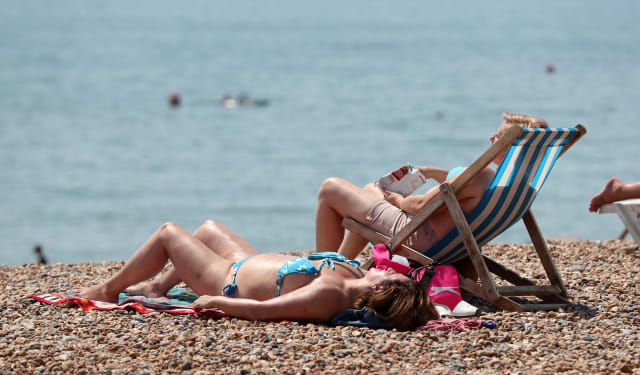 This summer could be a record breaker if temperatures stay above average, the Met Office has said.

It could be one of the warmest, driest and sunniest even if conditions revert to average for the rest of the summer, forecasters said as the season reached its midpoint.

If the rest of the summer is average, 2018 will rank in the 10 warmest summers on record and if the UK continues to see above average temperatures, "it could well be record breaking", the Met Office said.

Conditions have been unusually dry, with the UK having just 47mm (1.85in) of rain so far this summer.

Thunderstorms and a few very wet days in July 2013 meant that year was only the 14th summer on record by the end.

If the UK has average rainfall for the rest of the summer, it will have 174mm (6.85in), meaning it will just get into the 10 driest on record.

If the weather breaks with intense rainfall there could be a risk of localised flooding, as rain falling on dry or compacted ground runs off rapidly and makes river levels rise rapidly.

The Environment Agency said there had been a rapid decline in reservoir levels in the North West of England, and it backed United Utilities' move to bring in a hosepipe ban in August.

Paul Hickey, head of water resources at the Environment Agency, said:  "Across the rest of England, most groundwater supplies are at healthy levels and water companies have enough water to maintain supplies if resources are managed properly.

"Many rivers around the country have dropped to lower levels than normal for this time of year, which can be damaging to wildlife."

Measures are in place to protect the environment from taking too much water out of it, while farmers and other groups are being given advice about conserving water and planning for prolonged dry weather, he said.

It could also be one of the five sunniest summers on record if the UK gets an average amount of sunshine up to the end of August, the Met Office said.