What is atmospheric blocking and is it responsible for the current heatwave? 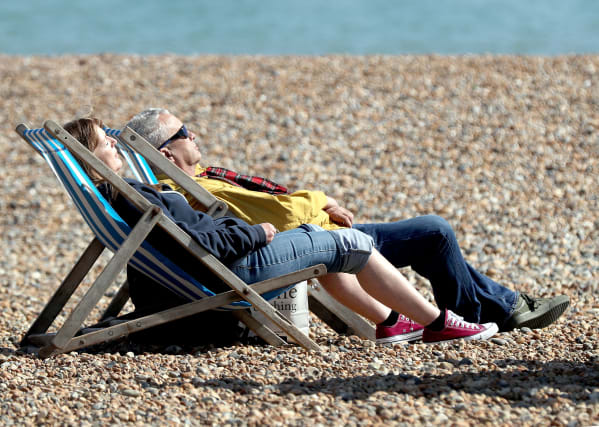 Seven million people in the north west of England are facing a hosepipe ban as the UK continues its 16th consecutive day of temperatures soaring to mid-20s.

The current heatwave is believed to be the longest since 1976 when there were 15 consecutive days of temperatures reaching 32C (89F) or higher and many months without rainfall.

The warmer temperatures have been attributed to "atmospheric blocking" - a meteorological phenomenon that causes certain areas to experience similar weather for a prolonged period of time - and here's everything you need to know:

What exactly is atmospheric blocking?

The phenomenon is associated with slow-moving, high-pressure systems that "block" westerly winds in the upper levels of the atmosphere, causing the normal eastward progress of weather systems to stall.

A block can lead to long stretches of extreme heat in the summer or bitter cold in the winter.

The strength and position of a jet stream - a flow of air that steers the movements of high-and-low-pressure areas - can also influence temperatures.

The jet stream helps in developing and steering areas of low pressure so if it is weak or positioned away from the UK, high-pressure systems will continue to persist.

Why is it causing a heatwave?

In a high-pressure system, the air from upper levels of the atmosphere is pulled towards the ground, where it becomes dense and compressed.

It not only inhibits winds, but also prevents clouds from entering the region.

Grahame Madge, a Met Office spokesman, said: "With the high pressure, the descending air starts to sink cooling a bit and suppressing the development of clouds and wind. Without clouds, the full energy of the sun is felt on the Earth.

"With the density of the air, it's very difficult to move. It blocks other weather systems.

"When you get the high pressure anchored over the UK it's very difficult to budge."

When is the blocking expected to end?

Predicting when atmospheric blocking will end is difficult.

According to the Met Office, the hot weather is expected to continue through July and into August, with a brief spell of relief for some places across the UK.

Is the phenomenon unusual?

The last time Britain experienced a prolonged heatwave was in 1976 - deemed to be the hottest summer since records began.

One of the theories is that atmospheric blocking is linked to solar activity and the ebb and flow of the sun's 11-year cycle that affects the levels of radiation.

Currently, the intensity of solar activity is decreasing in general and heading towards a "solar minimum" and studies suggest that a slowdown in solar activity can lead to an increase in atmospheric blocking.

Some scientists also believe climate change may be partly responsible for the high-pressure weather pattern in certain cases.

A 2016 study by researchers in Pennsylvania found an increase in the intensity of prolonged heat in certain areas across the Northern Hemisphere during the summer months from 1979 to 2010.