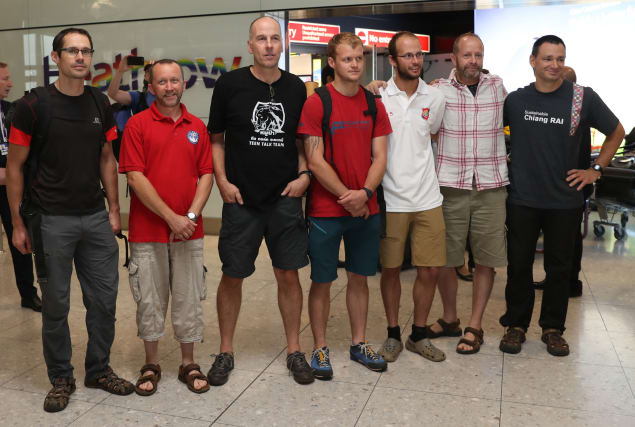 A crowdfunding page launched by Royal Navy divers in support of late Navy SEAL Saman Gunan is close to reaching its target less than a week after being set up.

The 38-year-old diver died as he attempted to rescue 12 schoolboys and their football coach from a flooded cave in Thailand earlier this month.

A JustGiving page set up by the Royal Navy Clearance Divers Association to support Gunan's family is now just shy of its £6,000 target.

The Thai diver, who came out of retirement to take part in the rescue mission, will also be honoured by the association with a tribute usually reserved for dead Royal Navy mine clearance divers.

Five bells will be rung out in his memory, for his "exceptional courage and bravery".

Tony Sexton, membership secretary at the RNCDA, said: "Petty Officer Saman Gunan was a hero in every sense of the word, he had retired from the Navy but on hearing of the plight of the schoolboys turned up and volunteered to undertake a dive very few would.

"He lost his life trying to help others. Five bells Sir, stand down, your work is done."

Sexton, a former mine clearance diver of 16 years, added: "The dive that Petty Officer Saman Gunan volunteered for fills me with both dread and admiration, I hope the money we raise can help to show his family how well regarded this brave man was, and assist them in the coming months."

Gunan had been delivering oxygen throughout the treacherous route but died when he himself ran out of air.

British divers Rick Stanton, a fireman in his fifties from Coventry, and John Volanthen, an IT consultant based in Bristol in his forties, were the first to reach the group.