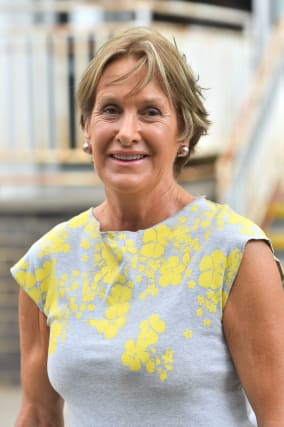 A former Olympic showjumper used pig's blood to daub lewd messages inside a Tory peer's house after she found he had cheated on her, a court has heard.

Lizzie Purbrick, 63, admitted using a key to enter the south London home of Conservative peer David Prior as a "cathartic" response to seeing her partner of several years "in the arms of another woman".

Camberwell Magistrates' Court heard Purbrick used a garden sprayer and several litres of pig's blood to cover the walls with phrases such as "whore", "lady slut", "big dick lord" and "Mags wet between the legs" on May 9.

There was no explanation in court over what the reference to "Mags" meant.

Purbrick, of West Acre, King's Lynn, Norfolk, admitted one charge of criminal damage to the home in Kennington, south London.

Defending, Simon Nicholls said: "This whole case has the feel of something lifted straight out of the pages of a Jilly Cooper novel."

Mr Nicholls said the pair, both estranged from their respective married partners, had been in a relationship for several years, adding that his client felt her affair with Lord Prior "had longevity".

But he said: "To put this delicately, this comes to an end when she discovers him in the arms of another woman who is married to another member of the House of Lords.

"The whole incident she describes as cathartic and she's now moved on."

"This was a one-off offence caused by the breakdown of a relationship."

She immediately handed herself in to the police following the incident, the court heard.

Lord Prior, son of former Conservative cabinet minister Jim Prior, was MP for North Norfolk from 1997 to 2001.

He was chairman of the Care Quality Commission from 2013 until 2015.

Purbrick competed for Great Britain in the 1980 Olympic Games.

The court heard Purbrick played loud music as she carried out the act - selecting pig blood because the victim "liked pigs".

A neighbour then raised the alarm when blood was seen seeping underneath the door.

Mr Nicholls said: "At 63, she accepts in a way that (the incident) is completely out of character."

She said: "There was a series of highly abusive slogans on the floor, both directed to Lord Prior and his new partner.

"They were, in my view, quite appalling."

Earlier, Mr Nicholls apologised on behalf of his client after she arrived at court wearing a white t-shirt and pink shorts.

Her counsel said she was let down by transport links to the court from nearby Oval station and was in such a rush she did not have time to change into more suitable attire.

Speaking after she left the court, and having changed into a grey and yellow dress, Purbrick said she was "relieved not to go to prison".

She added: "Bazooka'ed into jail? I did a while already (19 hours in custody following her arrest, she said) so I thought a second term would be very easy, yes.

"She was a very nice judge. A sweetheart."

Purbrick said she was due to catch a flight to South Africa, where members of her family live and where she plans to spend much of her time, later on Tuesday.

Asked about what that meant for her impending community service, she joked: "I think I've got two years to do 20 hours - I didn't listen to be honest."