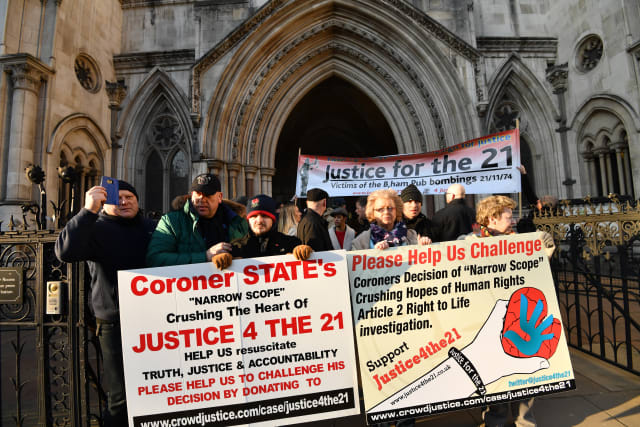 Lawyers for the coroner in charge of inquests into the 1974 Birmingham pub bombings have said the hearings will not resolve the "enduring injustice" for victims and their families.

Sir Peter Thornton QC is challenging a High Court ruling which ordered him to reconsider his decision to exclude an enquiry into the identities of those who "planted, planned, procured and authorised the bombs".

The bombings in two city centre pubs, widely believed to be the work of the IRA, killed 21 people and injured 182 - making it the deadliest peacetime attack in the UK at the time.

Outlining his submissions to the Court of Appeal, Peter Skelton QC said: "The 21 people who died in the bombings and their families have suffered an enduring injustice.

"So too have those who were injured and their families, and countless others who have been affected.

"The pain and grief they have borne has been exacerbated by the fact no-one has ever been held accountable in law.

"But, for the reasons the coroner gave ... these inquests cannot resolve the enduring injustice."

Mr Skelton, representing the coroner, added that the victims, their families and the public interest "cannot be served" by a promised resolution that "cannot be delivered".

Two High Court judges quashed a decision by Sir Peter to exclude the "perpetrator issue" from the new hearings following a judicial review brought on behalf of the bereaved families by Julie Hambleton, whose sister Maxine was 18 when she was killed in the bombings.

Ten of the families were in court on Tuesday to hear the appeal before the Lord Chief Justice, Lord Burnett, Lady Justice Hallett and Lord Justice McCombe.

They are also arguing it is necessary for the inquests to investigate the perpetrator issue because the police investigation into the bombings resulted in a "notorious miscarriage of justice".

Six men, known as the Birmingham Six, were imprisoned for the murders and served 17 years behind bars in one of Britain's most infamous miscarriages of justice before their convictions were quashed.

Five West Midlands Police officers were charged with perverting the course of justice in connection with the original criminal investigation, but a judge ruled in 1993 that a fair trial would be impossible.

Hugh Southey QC, representing the families, said there was the "most pressing need for a thorough investigation".

He told the court: "The actions of West Midlands Police officers in the investigation and subsequent criminal convictions are often considered to be the worst miscarriage of justice in British legal history.

"There has never been an effective and independent investigation into who was responsible for the atrocity.

"There is no prospect of such an investigation occurring, apart from within the inquest.

"Despite that, the appellant decided not to investigate the issue of who was responsible."

Mr Southey later added: "There is the utmost public interest in the proper investigation of who was responsible for the Birmingham bombings.

"The families of the deceased said to the appellant that the investigation of this issue was so important to them that if it did not form part of the scope of the inquest 'we may as well not have an inquest at all'."

Speaking before the hearing, Mrs Hambleton said: "It will be utterly redundant to have the inquests unless the perpetrators, their associates and those who prepared and planted the bombs are included."

She said supporters of the families' campaign group Justice4the21 have so far raised £75,000 for the case after Mrs Hambleton was refused legal aid.

The group held a demonstration outside the Royal Courts of Justice in London in February, supported by members of the Football Lads Alliance.

The hearing is due to finish on Tuesday afternoon and the judges are expected to give their ruling at a later date.