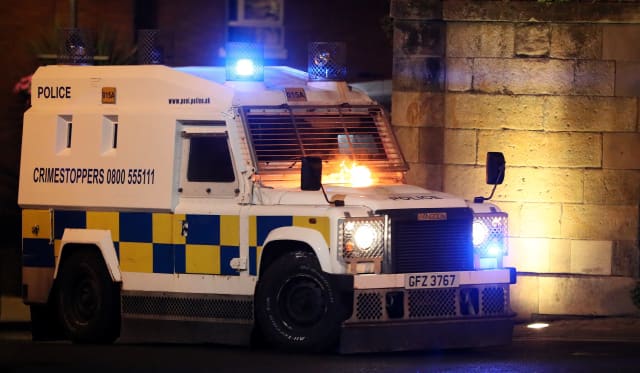 Tanaiste Simon Coveney met police and residents from the Bogside after the bout of unrest which saw explosive devices hurled at officers and dozens of petrol bombs thrown.

The Police Service of Northern Ireland said they had welcomed an incident-free Friday night in the Bogside and Fountain areas of the city.

The visits by political leaders came after police said it was a "miracle" no officers had been injured in the violence.

Mrs Foster visited the unionist Fountain estate where rioters have targeted homes, and writing on Twitter she said she was "so proud of the community spirit".

Before his arrival, Mr Coveney tweeted: "On road to #Derry to meet + show solidarity with all political, community and youth leaders working to end rioting and violence.

"Derry is a great city, making progress, wanting to look forward not backwards."

Mr Coveney met with the Unity of Purpose group to discuss how community groups, political parties and the PSNI can "work together positively".

He also said it was great to meet PSNI officers to thank them for their service "at the end of a difficult week".

The force said a 16-year-old boy who was arrested on suspicion of attempted murder has been released unconditionally.

Meanwhile, Madden & Finucane solicitors said the circumstances of a 16-year-old boy's arrest will be the subject of civil proceedings, for unlawful arrest, trespass to the person and a complaint to the Police Ombudsman.

The law firm said the boy was unconditionally released.