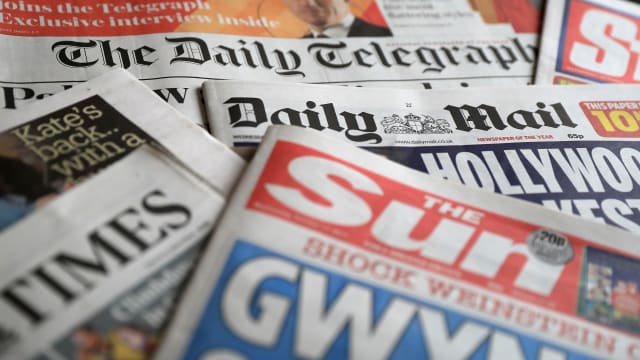 Donald Trump's arrival in the UK and his comments on Brexit and Theresa May make the majority of the front pages on Friday.

The Times carries a picture of Mr Trump and his wife Melania leaving London to head to Blenheim Palace alongside a report of the US president's criticism of Mrs May's Brexit plans.

The Daily Telegraph runs with a similar line with Mr Trump warning Mrs May about staying too closely aligned with the EU post-Brexit.

The Guardian leads with a future trade deal between the UK and the US, with the paper reporting that efforts to secure an agreement will be stepped up todya.

The Brexit plans lead the FinancialTimes, with the City calling them a "real blow".

The Metro carries a picture of the two leaders together, with the main story on Donald Trump's views that many Britons agree with him.

The i says the president has flown in to a "diplomatic storm".

The Sun has a exclusive chat with Mr Trump in which he takes aim at the Brexit plan, migration and London mayor Sadiq Khan, but backing Boris Johnson.

The Daily Mirror carries the headline "Donald Thump" after his attack on the Prime Minister's Brexit plans.

The Daily Express says that Conservative MPs are revolting against the Brexit plans.

While a vehement denial from Simon Le Bon over claims he assaulted a woman lead the Daily Star.