Queen to host Trump with tea at Windsor Castle 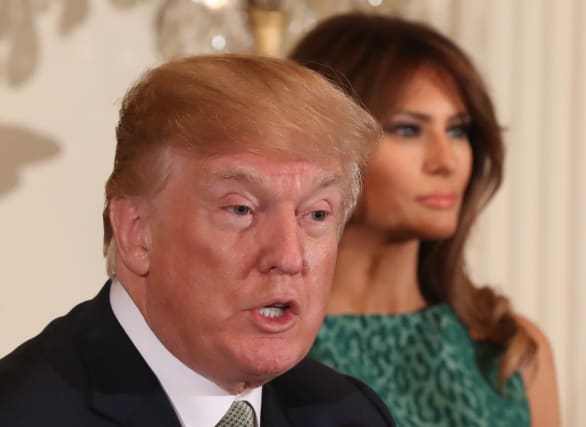 The Queen is preparing to greet US President Donald Trump at Windsor Castle.

The controversial American leader will be treated to a Guard of Honour when he arrives at the historic royal residence in Berkshire on Friday afternoon.

He will also join the monarch for tea in the castle - the Queen's favourite home.

Mr Trump and First Lady Melania Trump will meet Britain's head of state at the dais in the castle's Quadrangle, which features a neatly manicured central lawn.

Located in the Upper Ward, it sits with the castle's famous Round Tower to its west, and is surrounded by the impressive state, visitor and private apartments.

A Guard of Honour, formed of the Coldstream Guards, will give a Royal Salute and the US national anthem will be played.

The 1st Battalion Coldstream Guards is one of the British Army's longest serving units, and its band is one of the oldest and best-known military marching bands in the world.

The Queen and Mr Trump will inspect the Guard of Honour before watching the military march past.

Mr and Mrs Trump will then take tea with the Queen in the castle.

In 2008, when then US president George W Bush had tea with the monarch at Windsor, he enjoyed a traditional English afternoon spread of tea, small sandwiches and cakes in the White Drawing Room.

One of the biggest ever police operations is being staged to cover Mr Trump's brief stay in the UK.

Nearly every force in England and Wales has contributed officers to help with the massive mobilisation, the biggest since the 2011 riots.

Mr Trump's royal encounter is not a state visit - an offer that was extended to him by Prime Minister Theresa May in the early days of his presidency.

There will be no carriage procession and no opulent state banquet, and Buckingham Palace said no other members of the royal family will call in to Windsor to meet the billionaire-turned-politician.

When the then US president Barack Obama dropped in to see the Queen at Windsor Castle in 2016 - the day after her 90th birthday - he and Michelle Obama had lunch with the monarch and the Duke of Edinburgh in the castle's private dining room.

Philip, who has now retired from public duties, even took the responsibility of driving the Obamas, and the Queen, the short distance from their helicopter to the castle in the Queen's Range Rover.

In the evening, the Obamas dined with the Duke and Duchess of Cambridge and Prince Harry at Kensington Palace, and Prince George stayed up late to meet them.

Ronald Reagan's visit to Windsor in 1982 was also not a state visit but, unlike Mr Trump, he was hosted with a glittering banquet for 160 guests in the castle's St George's Hall.

The Queen wore a tiara, as did the monarch's sister Princess Margaret, to the grand formal white tie occasion, which was also attended by the Prince of Wales.

Speeches were delivered by both the Queen and Mr Reagan, with the monarch paying tribute to the lasting friendship between the nations.

She also mentioned how much she had enjoyed riding her horses with the American leader earlier in the day.

Mr Reagan stayed with the Queen at Windsor.

Mr Bush's visit to Windsor was part of his whistle-stop tour to the UK in 2008, five years after his state visit.

The monarch also gave Mr Bush and his wife Laura a tour of some of the castle's state apartments, including the restored St George's Hall.

In the Green Drawing Room, they viewed a private exhibition of pictures, letters and other items relating to visits to the UK by US presidents and royal trips to the US.