Nigel Farage has said he is ready to seek another stint as Ukip leader if the Brexit process is not "back on track" by March next year.

Mr Farage, who quit as leader following the 2016 EU referendum result, called on Conservative MPs to submit no confidence letters to get rid of the "appalling" Theresa May.

And he said that he would return to the political front line if the Brexit proposals which she brokered at Chequers last Friday were not ditched. 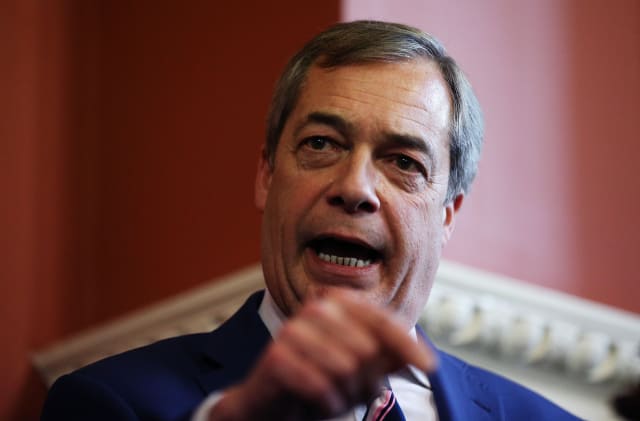 Speaking on his regular LBC radio phone-in, Mr Farage said: "I've already said that if Article 50 gets suspended beyond March 29, I will put myself back into full-time campaigning.

"I will add to that tonight. Gerard Batten, who is the leader of Ukip and has my confidence and support - his term as leader comes to an end in March of next year.

"There will be a leadership contest within Ukip in March next year. If Brexit is not back on track, if we're not actually going to be leaving and if this Chequers agreement has not been broken, I will very seriously consider putting my name forward to run as leader of Ukip again.

"I can assure any Conservatives listening to this, sitting in marginal seats, who are not prepared to stand up and honour the wishes of the electorate, I will make damn sure in that situation that you all lose your seats.

"Because there are millions of Conservative voters very unhappy indeed."

In a message on Twitter, Mr Farage welcomed Boris Johnson's resignation, and suggested that Environment Secretary Michael Gove should follow him out of the Cabinet.

"Bravo @BorisJohnson. Now can we please get rid of the appalling @theresa_may and get Brexit back on track," wrote the former Ukip leader.

"Time for @michaelgove to decide. Party or country, career or principle?"

Eloise Todd, the chief executive of the Best for Britain campaign, said: "Of course Nigel Farage is so keen to force through Brexit - he's one of the elite establishment figures who have already benefited personally from the 2016 referendum.

"It might be hard to think of a messier, more disastrous situation than the one we're in now - but Farage back in politics is what that looks like."

He took up the reins for a third time in September and October 2016 after Diane James's surprise resignation after 18 days as leader.