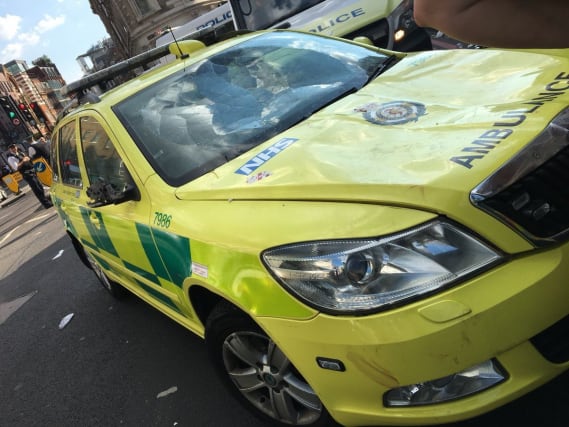 England football fans have been warned against alcohol-fuelled "senseless behaviour" after police dealt with hundreds of incidents over the weekend.

Forces were inundated with 999 calls after England's victory against Sweden, and recorded 387 incidents, mostly of alcohol-related disorder.

Rank-and-file officers warned policing during World Cup matches along with the impending visit by Donald Trump and the massive investigation into nerve agent poisoning in Wiltshire have put forces under increased pressure.

The incidents over the weekend included:

- disorder in Northampton that caused roads to be closed

- disruption in Bridlington, Hull and Cleethorpes as people climbed on bus shelters and vehicles.

The National Police Chiefs' Council (NPCC) said there have been 1,086 football-related incidents since the tournament began, with 226 domestic abuse related incidents and 230 arrests being made.

The NPCC Lead for Football Policing Lead, Deputy Chief Constable Mark Roberts, said: "It is incredibly disheartening to see over 300 incidents of alcohol-fuelled disorder from a minority of mindless individuals.

"This behaviour has real consequences.

"Numerous roads across the country were blocked stopping emergency vehicles getting to people in need and an ambulance is now off the road while being repaired.

"Shops were damaged, people were abused and assaulted and others climbed on buses and cars, causing damage to vehicles and in some cases, themselves.

"There is absolutely no excuse for this type of senseless behaviour. Emergency services resources are already stretched.

"We want people to celebrate and enjoy themselves but not at the expense of law-abiding fans and emergency services' resources."

He said the fans' behaviour was in "stark contrast" to how well-behaved supporters have been out in Russia.

Police bosses will be planning a beefed-up police presence when the national team plays Croatia on Wednesday.

When asked if rank-and-file officers were coping with the pressure, Simon Kempton, deputy treasurer of the Police Federation, said: "They are, but barely.

"This summer is busier than any summer since the Olympics because of the confluence of various things, the Trump visit, Salisbury and the World Cup, and there are festivals where you need a police presence to keep people safe.

"Then there's day-to-day policing which is in danger of being forgotten.

"Most forces have cancelled rest days in the run up to the Trump visit.

"Any job has its pressures and that's why your days off are so important because it's like a pressure release valve.

"When our members are denied these days off, the pressure on them builds and builds.

"With the England game on Wednesday, and it happened when we beat Sweden, that outpouring of emotion when you've got a large group of people in drink, you get a mob mentality, so when one person starts doing something a bit daft, you get one-upmanship.

"Your average Wednesday evening you would normally police with relatively low numbers.

"What's going to be different here is we're going to need an increased police presence because you know the possibility of disorder is going to be heightened.

"It happened on Saturday and we won the game, imagine if we lost?"

Forces across the country received record numbers of 999 calls over the weekend, with West Midlands dealing with its highest ever number in 24 hours, 3,276 calls.

Essex Police saw 1,860 incidents between 6am on July 7 and 6am on July 8, which was its busiest 24 hours of the year, while West Yorkshire dealt with 2,307 emergency calls on Saturday compared with 1,826 on the same day a week ago.

Humberside and Northamptonshire Police, which also had to deal with the British Grand Prix, each received the highest number of calls since New Year's Eve.

London Ambulance Service (LAS) also dealt with high demand, with 6,990 calls on Saturday, compared with 6,911 on New Year's Day, and 6,890 on Sunday, which was up nearly 17% from the same day a week earlier.

Millwall Supporters Club is raising money to pay for repairs to the damaged LAS vehicle.

Chairman of the Metropolitan Police Federation Ken Marsh said: "This is what alcohol does unfortunately, and it's what my colleagues deal with.

"It's not good, it's not acceptable, but it's what we deal with in policing."