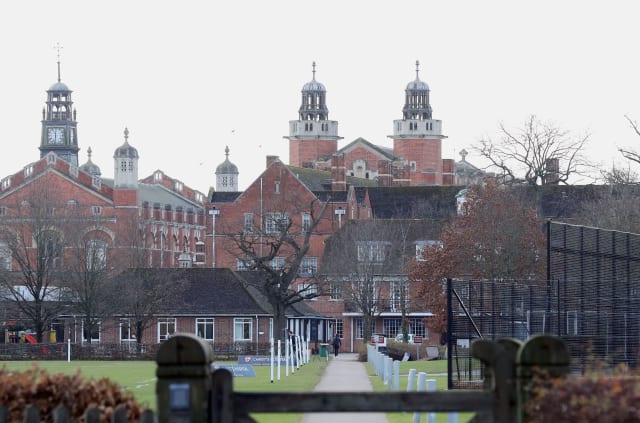 Two more teachers who worked at a top private school are facing jail after being found guilty of sexually abusing pupils.

A total of five teachers from Christ's Hospital School have now been convicted after police investigated complaints made by 22 former students.

A jury of seven women and five men at Hove Crown Court deliberated for 25 hours and 43 minutes before returning their verdicts on the 21 counts against James Husband and Gary Dobbie on Thursday.

The pair, who were friends, used to laugh together about their exploits, which took place over the course of 13 years while they lived and worked at the school in Horsham, West Sussex, the court was told.

Dobbie and Husband looked straight ahead from the dock and did not react as the verdicts were read out.

The NSPCC branded the pair "predatory and calculated".

Three other former members of staff at the school have been convicted of sex offences against pupils.

Peter Webb and Peter Burr were both jailed in the last year after admitting committing offences at the school between the 1960s and 1980s.

Sports coach Ajaz Karim was found guilty in April of assaulting six girls between 1985 and 1993 and is due to be sentenced in August.

Husband, 68, of Wigginton in York, was convicted of one count of rape and five of indecently assaulting a girl as young as 14 between 1990 and 1994. He insisted they had "consensual sex" once when she was 16.

He told a 15-year-old pupil: "It's OK, I've had a vasectomy" before raping her, the court heard.

Afterwards, he confided in Dobbie about the encounter, who later joked with the girl that she had "beard rash", indicating that he knew what had happened. He also indecently assaulted the same pupil later on.

Husband's victim "lay there like a rag doll" while he raped her and waited for it to be over, the jury was told.

She described being "disgusted with herself" and felt suicidal.

His victim reported him to the school's chaplain but no action was taken. Even her mother did not believe her story.

Husband left the school after it emerged that he was having a consensual affair with a 17-year-old pupil who was not under-age and not a complainant in the case.

The married father, whose children were attending the school at the time, "deceived" senior staff by embarking on the fling, jurors heard.

The former tutor and head of department talked about the "spur-of-the-moment" encounter which involved several instances leading from holding hands and kissing to sex.

Giving evidence in his defence, he spoke of his desire to kiss her during a period when he felt disgruntled with how the school was being run.

In a diary entry read to the court, the girl said: "Told too many people at school then decided to go for it. The fling. So got off with him on Saturday night. The most amazing thing. Happy."

Dobbie, 66, of Albi in France but formerly of Hereford, was found guilty of 15 counts involving multiple offences against six boys and two girls as young as 12 between 1998 and 2001.

He was teaching at independent Shrewsbury School, Shropshire, at the time of his arrest in 2016.

When questioned by police, Dobbie branded the claims "totally untrue".

Dobbie groomed pupils by hosting dinner parties at his house in the school grounds with favourite students. He would ply them with whisky and wine while encouraging them to talk about their sexual encounters.

At one of the gatherings, a victim recalls a man who also attended as a guest rating the boys in order of their attractiveness, to Dobbie's "delight".

On another occasion, after giving a girl alcohol, she came out of the bathroom to find Dobbie had undone his trousers and was "grinning at her". Fearing that he wanted to have sex, she left the property.

After she left the school, she told her mother, who phoned housemaster Neil Flemming but no action was taken.

Dobbie took a boy as young as 12 to a bedroom, telling him to take off his breeches and underwear while Dobbie performed a sex act on himself.

Another boy recalled falling asleep on his sofa and waking up to find him kneeling beside him with his hand in his shirt.

Dobbie even helped to raise money for another pupil - who was abused over a period of six years - to take a gap year after leaving school and assaulted him when he returned for a visit.

Sussex Police began investigating teachers at the school in 2016 after allegations were made about Husband.

The cases, involving different victims and time periods, were treated as separate inquiries - apart from Dobbie and Husband, who were tried as co-defendants.

In October, barristers representing Burr, Karim, Dobbie and Husband tried to ban press coverage of court proceedings until all the cases had concluded - effectively attempting to delay publicity for the best part of a year - by claiming that it would be prejudicial to the defendants.

But Judge Christine Henson rejected the plea after it was challenged by Press Association in the public interest.

An NSPCC spokesman said: "Children should feel safe and protected at school. Dobbie and Husband's predatory and calculated actions represent a shocking abuse of their position of trust."