Tech giants are not too big to regulate, Culture Secretary warns 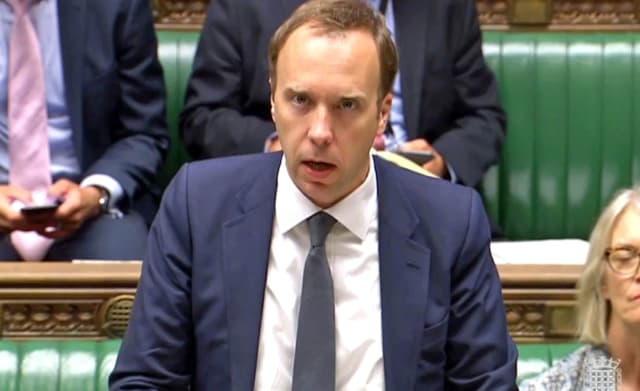 Culture Secretary Matt Hancock has issued a warning to giant technology companies that they are not too big to regulate.

Mr Hancock also said that international regulation would be needed to impose controls on the use of artificial intelligence (AI), warning that the fast-developing technology has the potential to be "highly destructive" if used wrongly.

Mr Hancock said policy-makers worldwide needed to take the same approach to AI as has been applied over recent decades to ensuring that nuclear technology did not result in disaster.

The Culture Secretary announced in May that new online safety laws will be created to make sure the UK is the safest place in the world to be online.

Speaking at an event hosted by website Politico in Westminster, he dismissed suggestions that it was too difficult to regulate the tech giants.

He was critical of the earlier approach of trying to encourage companies to take voluntary action to tackle the social problems caused by their products, which he said had resulted in "unhappiness" between the public and the big platforms.

"There was an attitude that pervaded for a generation that these companies are global and therefore you can't regulate them," he said. "Not true.

"That the technology changes fast and therefore you can't regulate it. Not true.

"That people don't understand and therefore we can't regulate it. Also not true."

Mr Hancock said he expected the tech sector to welcome the establishment of "pro-innovation" regulations which could stem the growing public "unhappiness" with social media  platforms.

He hit out at companies which create games "actively designed to use psychology that purposefully makes them addictive", describing the practice as "a problem (and) wrong".

And he called on social media companies like Facebook to "properly" police minimum age limits on their platforms, dismissing suggestions that it would be too difficult to develop technology to do so.

"If we want the technology to exist, we can design it," said Mr Hancock.

He revealed that he does not allow his children to use Facebook, because they are below the site's minimum age limit.

Mr Hancock said he had not personally received the kind of death and rape threats which have been directed at female MPs on social media.

But he said he was using new technology to filter out and block abusive comments on his own "Matt Hancock" app.

Mr Hancock said that AI had the potential to deliver life-enhancing benefits, particularly in the areas of medicine and transport, but could also have destructive consequences.

He said: "We have been living for 70 years with a technology that can destroy the world and it is through politics and diplomacy that we have ensured that there hasn't been a nuclear holocaust.

"I think we have to have the same attitude to AI, that it is likely in the decades ahead to be so powerful that it could be highly destructive.

"We have to ensure we have the rules-based international framework and the political backing to ensure that AI is good for humanity."