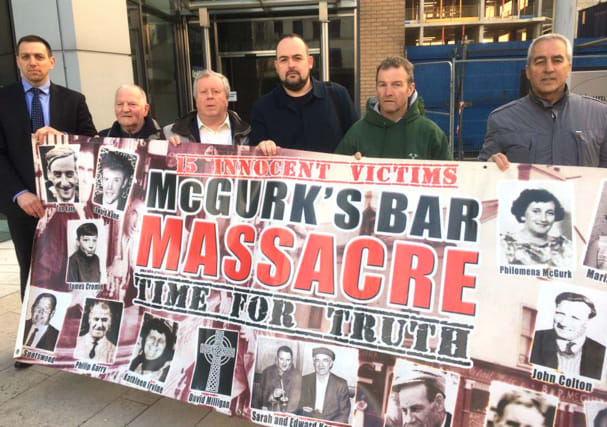 Relatives of people killed in a notorious Belfast bar bombing say they are unhappy with a decision not to hold a fresh inquest into the atrocity.

Fifteen people were killed in the McGurk's bar bombing in December 1971.

The bombing was carried out by the UVF but at the time security forces blamed the IRA, prompting speculation the dead might have included IRA members who were carrying the device.

Relatives and campaigners discovered large amount of new evidence not heard at the original inquest held the year after the atrocity.

In a statement, KRW Law, who represent a number of the victims' families, said: "We have been informed that the Attorney-General for Northern Ireland has refused an application made by KRW on behalf of the families to direct a fresh inquest into The McGurk's Bar bombings.

"KRW and the families will be considering the reasons for this decision over the following days.

"The families are unhappy with the decision given the serious difficulties they have faced in establishing the truth concerning the death of their loved ones.

"There is on-going public law and civil litigation being pursued before the courts in Northern Ireland but the decision of the Attorney-General is unwelcome and his response will be carefully analysed."

A UVF man was convicted for his part in the attack in 1978.

A Police Ombudsman's report in 2011 said RUC officers had shown an "investigative bias" with the original mis-attribution of blame.

However, the PSNI's then-chief constable Matt Baggott refused to accept that particular finding by the ombudsman and a subsequent probe by the police's Historical Enquiries Team (HET) concluded there was no such bias.

In a further twist, Mr Baggott's successor George Hamilton reversed the police's position in 2015, acknowledging there was bias in the initial RUC investigation.

He said the HET report findings had been amended to reflect the change in stance.

The office of the Attorney General for Northern Ireland has been contacted for comment.