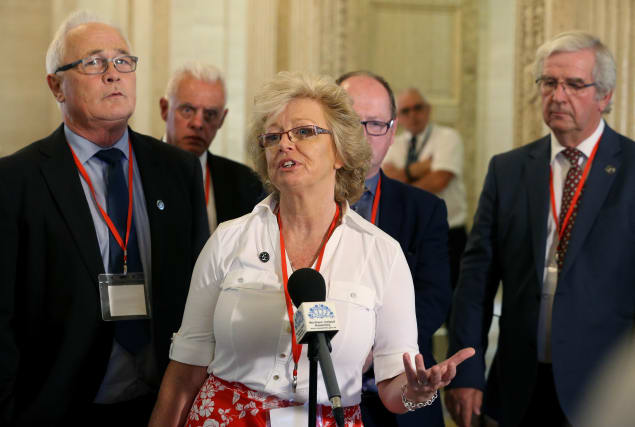 Families of the 21 people killed in the 1974 bombing of Birmingham say they feel they have taken a positive step forward after meeting political leaders in Northern Ireland.

Five of the families were in Belfast on Wednesday for a on-day visit, meeting Sinn Fein's Northern Ireland leader Michelle O'Neill and DUP leader Arlene Foster at Stormont.

Julie Hambleton, whose sister Maxine died in the atrocity, described both meetings as "very positive".

She said both Ms Foster and Ms O'Neill had listened to their concerns and pledged to take them to the authorities on their behalf.

"We hope that this is going to be another positive move forward for our campaign and for our fight for truth, justice and accountability," she said.

"On behalf of the families and our legal team, KRW Law, we would like to sincerely thank Arlene Foster and Michelle O'Neill for taking the time out of their very busy schedules to meet with us at relatively short notice to discuss our huge concerns, and to be so kind and considerate and patient with us.

"We feel now that we have taken a positive step forward, we have gone into uncharted waters and we hope that now we move from the dark into the light, and that's all we can but hope for."

Ms Foster and Ms O'Neill did not speak to the media following their separate meetings with the families, instead issuing statements.

Ms Foster said her meeting with the families started by remembering each of the 21 people who died in the blasts.

"We have committed to following up on the issues raised during today's meeting with the families in the future and I look forward to that ongoing relationship," she said.

Ms O'Neill said she listened closely to the family's concerns and extended sympathy on behalf of her parties to the families.

"Sinn Fein said that all victims need to be treated with equality and dignity and respect," she said.

"We have consistently supported all families in campaigns for inquests which are compliant with Article 2 of the European Convention on Human Rights. We will also support the Birmingham families in this regard."

Ms Hambleton would not be drawn on exactly what was discussed at both meetings, saying what was talked about will "remain in confidence" in hope it can bring about positive steps forward.

She defended the group's decision to meet with Sinn Fein, a party with past links to the IRA which is believed to have carried out the Birmingham pub bombs.

"Some people that won't be happy with what we are doing, we can only walk in our shoes, we cannot walk in other people's shoes and what we decide to do, we decide to do as a family democratically," she said.

Earlier Ms Hambleton said she was going into the meeting with Sinn Fein with a "blank sheet".

Some 21 people were killed and 182 left injured on November 21, 1974, after bombs exploded at two pubs in central Birmingham.

No-one has been charged with the attacks since six men wrongfully convicted of carrying out the bombings were freed from prison in 1991.

The families of the victims are currently raising money to defend against an appeal by a coroner against a High Court ruling to name the suspects over the Birmingham pub bombings in new inquests.

The families raised £40,000 to pay for the judicial review after they were refused legal aid by the Ministry of Justice, who said the bid did not meet strict criteria.

They have fought for years to have the inquests reopened.

Hearings were held days after the bombings, but closed without hearing any evidence.

Ms Hambleton said all the families have different wishes, but hers would "like to see justice done".