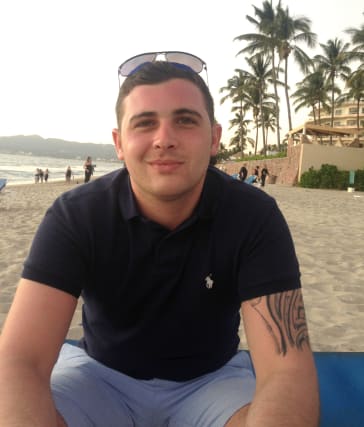 An eyewitness has described to an inquest the shocking moment a "ferocious" fire erupted from the top of a British Army tank, leaving two soldiers fatally wounded.

Coprorals Matthew Hatfield and Darren Neilson, both of the Royal Tank Regiment (RTR) and fathers, died of their injuries after an explosion in their tank at the Castlemartin firing ranges, Pembrokeshire, Wales, on June 14 2017.

Cpl Neilson, 31, from Preston, Lancashire, was the tank commander and was thrown from Challenger 2 during the blast, while Cpl Hatfield, 27, from Amesbury, Wiltshire, was loading ammunition.

From his viewpoint in a nearby range observation tower, Captain Thomas Nye, also with RTR, described what he saw, and said: "So they've loaded...and then fired.

"I initially didn't think it had fired, it didn't look like the gun had recoiled.

"What it later turned out was that Cpl Neilson had coveralls on and they'd come off as he'd been blown through the turret."

The captain, who on the day was senior range control officer, appeared emotional as he described the next moments to a coroner's court in Solihull, West Midlands, as a blaze shot from the tank's turret.

He said: "It was a couple of seconds and then a really violent fire erupted from both hatches at the top of the tank.

"The operator's side was a lot more ferocious and burned between three to five seconds."

The officer, who joined the Army in 2014 and was still then a lieutenant, said he tried to raise the crew on the radio, without a response.

An armoured military ambulance headed towards the scene and a rescue operation, for which the regiment was well-drilled, swung into action.

Cpt Nye said: "There was an element of debate or wonder as to whether to enter the tank.

"Nobody knew what had happened inside that tank, whether other ammunition was on fire."

A fire extinguisher device, which "sucks the oxygen from the turret", was thrown inside the vehicle.

Cpl Neilson was found at the side of the tank and moved 100 metres away, where he was found to be in cardiac arrest.

As other personnel cleared an area for air ambulances to land, civilian paramedics began arriving within a few minutes.

"Over a period of half an hour, they got the operator Cpl Hatfield out.

"Doing crew cas-evac (casualty evacuation) drills, someone got inside the tank, wrapped a rope around him - pulled him out the turret and lowered him down the side of the tank.

"Mr Lawson was pulled out in similar fashion."

He added: "What was apparent to me, was they couldn't get in the driver's hatch."

The officer said: "I think it might have been fire brigade that got him (the driver) out cutting with jaws of life, at which point they were triaging the casualties."

Senior coroner Louise Hunt asked him: "From your perspective, were you content with the way the emergency was dealt with on the ground?"

Cpt Nye replied: "Yes, it was better than expected.

"All four in that tank were dead, I thought.

"Given the ferocity of the blaze I thought nobody survived - it's a real credit anybody got out."