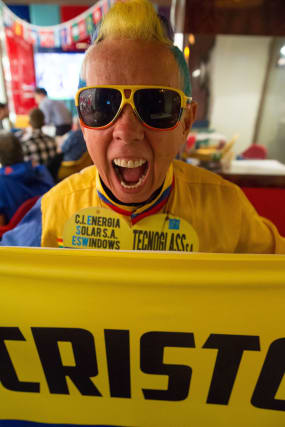 Colombia's biggest football fan has said he expects England to give the national side a "hard" game.

The 65-year-old has followed the national side everywhere for 28 years, attending all World Cup matches, including qualifiers, as well as 12 Olympic Games.

Speaking to the Press Association through a fellow fan, Jaime Diaz, who interpreted his answers, El Cole said: "It's a hard game, very complicated.

"England is a very good team.

"We have faith that we can win. We have the illusion that we can play a very good game against England.

"That illusion is because the country together makes the team strong.

"Colombia is a country that is very passionate about soccer.

"We love soccer, we believe that Colombia can have a very good tournament."

Asked if he believed Colombia could win the World Cup, he said: "We're going step by step.

"Every fan imagines to see their team in the final."

As a veteran of eight World Cups, including those Colombia did not qualify for, he said he was enjoying the tournament in Russia but sometimes found it difficult to get through security with his huge outfit on.

"The organisers and Fifa has been organising an excellent World Cup, especially the logistics and the volunteers," he said.

"When you come and talk to them they are very kind to the people.

"And in the stadiums the security is very strong and they check everything which can be a little hard."

The father-of-two, who also has three grandsons, said he hoped to pass the legacy of his dedicated fandom on to the youngest - seven-year-old Josue Arenas.

Translating El Cole, Mr Diaz said: "His grandson of seven loves soccer - he jumps from the tables saying 'I'm going to fly like my grandfather'.

"He thinks that he's going to carry on his legacy."