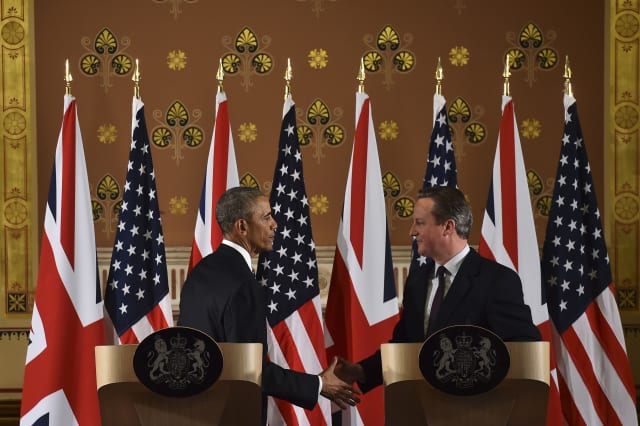 Barack Obama was asked by David Cameron to issue his famous warning that the UK would be at "the back of the queue" for a trade deal with the US if it left the EU, a former adviser has said.

Downing Street insisted at the time that the then-US president was using his own words when he made the comment during a press conference with Mr Cameron in the run-up to the EU referendum in 2016.

But there was intense speculation at the time that the remark may have been scripted by Number 10, because the word "queue" is rarely used by Americans, who tend to prefer the phrase "back of the line".

Mr Obama's then-foreign policy speechwriter Ben Rhodes has now revealed that the comment came up during a discussion between the US and UK sides about the implications of Brexit, and said that it was Mr Cameron who suggested the president should repeat it in public.

But Mr Rhodes stressed that Mr Obama believed that the warning was correct.

Speaking to BBC Radio 4's Today programme, Mr Rhodes said: "We had come here to try to help the Remain campaign and we had a meeting with David Cameron and his team and we were all kind of in violent agreement about the negative consequences of Brexit.

"And in talking about the press conference they were going to hold together - Cameron and Obama - we were discussing the arguments for the Brexit campaign.

"And some of the arguments were based on the notion that the United States could just negotiate its own free trade agreement with the UK quickly and we were all agreeing that that was unlikely to happen.

"And as Obama was saying that, somebody on the British side said: 'We'd end up being at the back of the queue,' and everybody laughed and Obama said 'That is exactly right'.

"Then he was asked: 'It would be good if you could repeat that point in the press conference', and of course he did."

Asked whether it was the then prime minister himself who made the request, Mr Rhodes said: "Yes. To be fair to Cameron, I don't know that Cameron was suggesting the exact phrase that had been used on his side, but that is what was put forward. Obama said: 'Yes, I'm here to be helpful.'

"Substantively, it was correct. It wasn't true you could just skip to the front of the line, but 'queue' is not a word Obama uses in casual conversation."