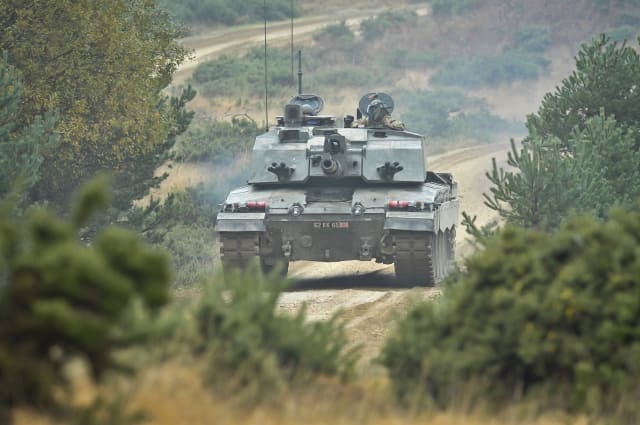 An air-tight seal stopping 3,000C high-explosive gases escaping into a tank crew's turret was not in place before a lethal blast, an inquest into the deaths of two soldiers has heard.

Coprorals Matthew Hatfield and Darren Neilson, both of the Royal Tank Regiment (RTR), died of their injuries after an explosion in their tank at the Castlemartin firing ranges, Pembrokeshire, Wales, on June 14 2017.

Cpl Neilson, 31 and a father of one from Preston, Lancashire, was the tank commander and was thrown from Challenger 2 during the blast, while Cpl Hatfield, 27, from Amesbury, Wiltshire, was loading ammunition.

Evidence has also been heard that the tank shell's ammunition, known as "bag charges", may have been "incorrectly stowed" outside boxes within the turret.

It also emerged the men, both highly trained gunnery instructors with combat experience, were only in the powerful battle tank because they were taking another soldier out for a "guest shoot".

An Army training officer, Sergeant Alexander Ahtom, told the coroner he "never thought it possible" the gun could be fired without the key seal being in the barrel.

Resuming their inquests on Monday, a coroner said a crew of four, including the two men, took the tank to the British Army range's firing point, after it had been used by another team for an annual crew test.

She said a key piece of equipment fitted to the rear of the tank barrel, called the bolt vent axial (BVA), had been removed by the previous crew, for cleaning.

Police investigators said its removal was standard practice, as it required post-firing inspection, and it was placed in a box within the tank turret called the "brew bin".

Detective Sergeant Matthew Briggs, of Dyfed Powys Police, told the hearing in Solihull, West Midlands: "As it required inspected before refit, the BVA was put in brew bin."

After the explosion, the BVA was found alongside the mobile phone later identified as belonging to father-of-one Cpl Hatfield.

Mr Briggs, presenting a "suspected sequence of events", said as they prepared the gun for firing, a display unit on the loader's guard inside the turret would have shown a "red light" as the BVA was not fitted, preventing firing.

He said Cpl Hatfield "would have followed correct procedure", by manually fitting another piece of equipment - the tube vent electric (TVE).

Mr Briggs added: "As TVE has been fitted manually, it would have shown a green light.

"As there was no BVA, there would be no gas tight seal and the force of the bag charge would have come back into the turret."

Senior Coroner Louise Hunt earlier read a statement setting out what then happened: "At around 3.30pm, a hissing sound was heard and noises and smoke.

"Corporal Neilson was seen to be climbing out of the commander's turret and there was an explosion.

"He was projected out the turret, landing some distance away."

Major John Poole, head of establishment - and in charge of safe firing that day - told the court he heard at his position in the base's observation tower "stop, stop, stop" over the radio.

He shut down all firing at the range and called 999.

The coroner heard evidence the tank had only been taken out that afternoon because the deputy safety training officer, Warrant Officer Stuart Lawson, had asked permission to go out and fire a tank.

But giving evidence in the witness box, Maj Poole said according to Ministry of Defence rules in pamphlet 21, it needed "two-star written authorisation" - effectively from a brigadier rank officer - to allow a non-trained soldier into a tank.

That would have been a level above that of the commanding officer, the inquest heard.

WO Lawson and another soldier Trooper Michael Warren in the tank were injured, but survived the blast.

Ms Hunt read a statement from Lt Col Ridgway, in which he had said there was "genuine military justification for WO Lawson to be in the turret to observe firing", in order to improve the range officer's understanding of the tank fire operations.

Maj Poole, who joined the Army in 1986, was asked by the coroner about his knowledge of "incorrect stowed baggage charges" in tank turrets, and whether he knew if it went on.

He said "as a young corporal" he had stowed the explosive breach-loaded bags incorrectly, outside storage boxes, but things were now more "strict" and much more safety-conscious.

But in a statement to the MoD team, he had said: "To think those boys stowed those bag charges incorrectly is a little disappointing to be honest I would have thought they'd have known better.

"Whether they were trying to show off to Mr Lawson, or trying to get through it (firing) as quickly as possible, I don't know."

When asked if he was aware of the practice by other crews, he responded: "Well, we're here because somebody else hasn't stored charges correctly."

Since the incident, new drills have been put in place to check the BVA is present and ammo storage policies tightened-up, the inquest heard.