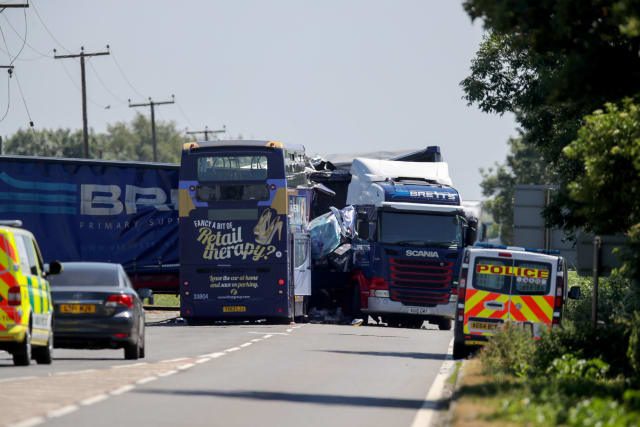 A bus driver and one of his passengers were killed as a double-decker collided with a lorry in Cambridgeshire.

Twelve other people were injured, five seriously, in the crash on the A47 near Guyhirn on Tuesday morning.

The bus collided with the lorry as it was pulling out of a yard onto the road, Inspector Jamie Langwith said.

Both men died at the scene.

Injuries sustained by those hurt in the crash at around 7.30am range from broken legs to brain injuries, but none are in a life-threatening condition, Inspector Langwith said.

Of the circumstances of the crash, he said: "What we do know is that they have a coming together where the HGV has pulled out of the yard and the bus has collided into the side of it."

He confirmed the lorry driver had escaped injury.

Around a three-mile stretch of the A47 was closed following the collision and police said it would remain so until at least the early evening.

Footage from the aftermath at the scene showed the bus, which had been travelling eastbound on the road, lodged into the side of the lorry, which appears to have been heading westbound.

Steve Wickers, managing director at First Eastern Counties bus company, confirmed a driver based at their King's Lynn depot had died and said he was "shocked and saddened" by the incident.

He said: "Our thoughts are with the families of the deceased and we will be providing as much support to them as we can through this difficult time.

"We will now be working with the police while they undertake their investigations."

The crash, involving a Bretts Transport lorry, happened near the firm's distribution centre at Thorney Road in Guyhirn.

A spokesman for Bretts said: "We acknowledge there has been an incident on the A47 this morning involving one of our vehicles just outside our premises.

"At this stage we are giving the emergency services our full support and co-operation."

According to its website, Bretts Transport specialises in deliveries to the retail, food service and food manufacturing sectors, delivering more than 4,000 tons of canned food and other grocery products along with 5,000 pallets of food grade packaging each week.

Those injured were taken to Peterborough City Hospital and the Queen Elizabeth Hospital in King's Lynn.

The PM will need to rest as he recovers from Covid-19, says his father

Why the '5G conspiracy' is harmful (and making some people money)