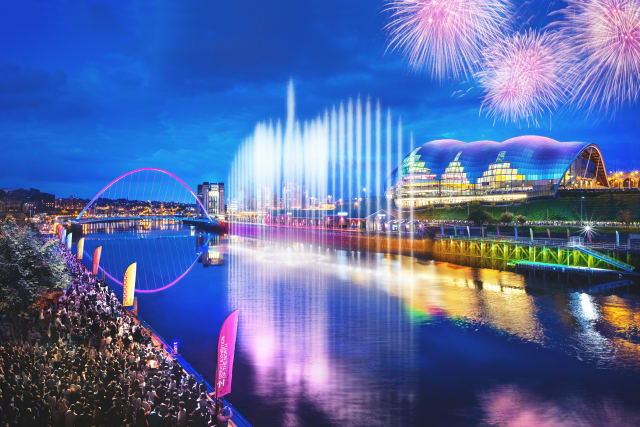 One hundred drones flying in formation will light the night sky to mark the opening of the Great Exhibition Of The North.

More than 20,000 people will line the banks of the Tyne to watch the spectacular display, which will launch the 80-day celebration of northern England, its scientific achievements and its art.

Around three million people are expected to visit the festival in Newcastle and Gateshead, with more than a third of those coming from outside the region.

Tourism experts predicted the event will bring £184 million into the North East economy.

They were pleased with the positive picture of the region that was presented nationally as the BBC broadcast under blue skies from the famous Quayside.

Nick Forbes, leader of Newcastle City Council, said: "The Great Exhibition is an opportunity for us to say, loud and proud, that our better days are ahead of us, rather than behind us."

The opening event will feature drone company Skymagic's first UK display, watched by a crowd of 20,000 on Friday night.

One hundred drones fitted with LED lights will be piloted in formation between the Sage music centre and the Baltic art gallery, choreographed to form different 3D shapes.

Projects director Mungo Denison said: "We want to surprise people, we don't think they will have seen something like this before. We are looking forward to blowing people away."

There will also be an 80-metre water sculpture on the Tyne and a spectacular firework display.

Following the launch night event, the exhibition will continue until September with events and trails across Tyneside, ranging from the loan of Stephenson's Rocket from the Science Museum to a showcase from the Turner Prize winner Lubaina Himid.

Newcastle Gateshead Initiative chief executive Sarah Stewart said: "It will reward repeat visits, there's no way someone coming for the day would be able to see all aspects of it."

Matt Hancock, Secretary of State for Digital, Culture, Media and Sport, said: "Newcastle-Gateshead will put on a fantastic festival for the whole country.

"It will once more highlight the creative strength of the Northern Powerhouse and how cultural investment can boost economies and inspire communities."

Carol Bell, executive director of Great Exhibition Of The North, said: "Today marks the start of an incredible summer and we hope local residents and visitors from far and wide will come and experience the array of amazing exhibits, live performances and displays of innovation we have on offer for free throughout the summer."