Drones and fireworks launch Great Exhibition Of The North 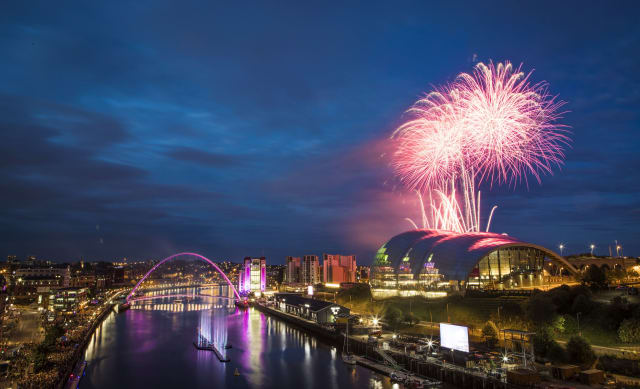 A crowd of 20,000 people gathered on the banks of the Tyne for a spectacular celebration of Northern culture which launched a major exhibition.

One hundred drones flew in formation to make out an atom, a DNA helix and a North Star before a firework finale ended the show which marked the start of the 80-day long Great Exhibition Of The North.

The festival will show case scientific and artistic achievements, and is expected to be seen by three million visitors.

The event could generate more than £180 million into the regional economy.

The opening event brought crowds to Newcastle's quayside and was opened by local rockers Maximo Park, playing on board a boat named after local hero Sir Bobby Robson.

They were followed by an intricate water sculpture which shot coloured jets high into the summer sky.

Poet Lemn Sissay then debuted his work Anthem for the North from the Millennium Bridge, and drew cheers with the lines "This is the backbone of Britain, and they say its cold?

"But there's nothing warmer than a Northern soul."

After the show retired engineer Michael Lambert, from Cleadon, Sunderland, said: "The drones were fantastic, I don't know how they did it."

Charity administrator Sheila Keenleyside, from Hexham, Northumberland, said: "There was a lovely atmosphere.

"The show was excellent, the live music and the fireworks."

One hundred drones fitted with LED lights were piloted in formation between the Sage music centre and the Baltic art gallery.

One pilot controlled the drones which were pre-programmed to fly in formation at 400ft above the Quayside.

Before the show, projects director Mungo Denison said: "We want to surprise people, we don't think they will have seen something like this before.

"We are looking forward to blowing people away."

The exhibition continues until September with events and trails across Tyneside, ranging from the loan of Stephenson's Rocket from the Science Museum to a showcase from the Turner Prize winner Lubaina Himid.

Before the event Nick Forbes, leader of Newcastle City Council, said: "Hosting the Great Exhibition is a fantastic opportunity to showcase Newcastle-Gateshead, as well as to challenge head on out-dated perceptions that the North is in decline.

"By showing off our heritage, our culture and in many areas where we are leading international innovation, we are creating a new narrative."