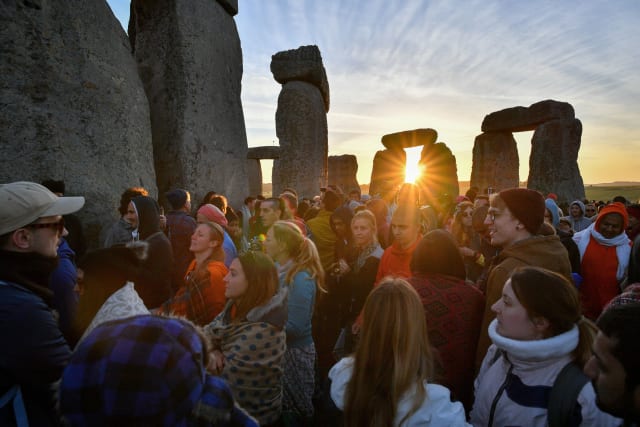 Thousands of people celebrating the summer solstice were treated to a perfect sunrise at Stonehenge.

Those who observed the spectacle at the Neolithic Wiltshire monument cheered loudly as the sun glinted over the horizon at 4.52am.

Stonehenge is built along the solstice alignment of the summer sunrise and the winter sunset.

On the longest day of the year, the sun rises behind the Heel Stone, the ancient entrance to the Stone Circle, and rays of sunlight are channelled into the centre of the monument.

It is believed that solstices have been celebrated at Stonehenge for thousands of years.

Up to 25,000 people were expected to travel to Stonehenge but English Heritage said only 9,500 turned up.

Kate Davies, director of Stonehenge for English Heritage, said: "Celebrating summer solstice is one of the highlights of the year at Stonehenge.

"It's a great opportunity for friends and families to come together and mark the longest day of the year, as people have done for thousands of years.

"There was a lovely, friendly atmosphere throughout, the sun shone, and dawn was met with loud cheers.

"Summer solstice at Stonehenge is a major operation and we couldn't do it without the support of our partners, especially Wiltshire Police and Wiltshire Council.

"We look forward to welcoming people to the summer solstice again next year."

Visitors to the World Heritage site were urged to only bring small bags and alcohol was not permitted.

They were asked to share lifts or take public transport to reduce traffic and emissions.

Wiltshire Police were also on hand with armed officers as a precaution.

Attendance varies due to the day of the week the solstice falls on, as well as weather conditions and even football fixtures.