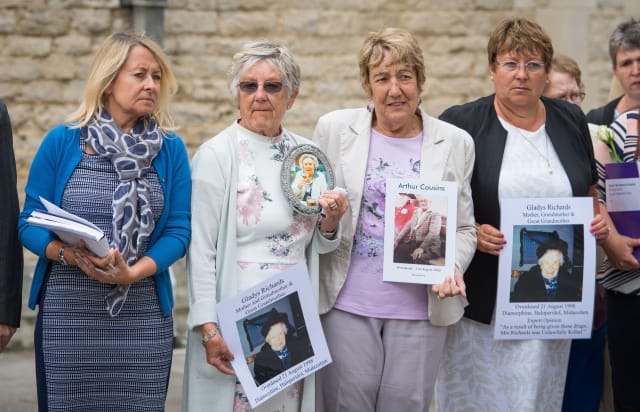 A nurse who tried to expose the Gosport War Memorial Hospital scandal was forced out of her job after speaking out, her daughter has claimed.

Sylvia Giffin was among those who first raised concerns about the poor prescribing and administration of opioids at the Hampshire hospital nearly 30 years ago.

A damning report revealed the fears of nursing staff were "silenced" by management, leading to further deaths on the wards.

More than 450 people had their lives shortened after being prescribed the powerful painkillers, while another 200 were "probably" similarly given opioids between 1989 and 2000 without medical justification, the inquiry found.

Mrs Giffin's daughter Penny Wilson says her mother ended up with depression after being bullied in the wake of her claims.

She told the Daily Mirror: "After my mum spoke up, they were at her for every single thing.

"It made her very unwell. They forced her out but tried to blame it on ill health."

Early in 1991, Mrs Giffin's colleague Anita Tubbritt rang Keith Murray, the local Royal College of Nursing branch convener, to express concerns over the use of diamorphine and syringe drivers.

Mr Murray had a meeting at the home of Mrs Giffin with five or six other nurses who said diamorphine "was being prescribed without due consideration being given to the use of milder sedatives first".

A staff meeting was held in July and 10 nurses attended, raising concerns about the use of diamorphine and that "patients' deaths are sometimes hastened unnecessarily".

Another meeting was held in December for all staff members concerned about the prescribing of diamorphine - but the inquiry found it had "had the effect of silencing the nurses' concerns".

The report stated: "The documents reviewed by the Panel show that, between February 1991 and January 1992, a number of nurses raised concerns about the prescribing of drugs, in particular diamorphine.

"In so doing, the nurses involved, supported by their Royal College of Nursing branch convener, gave the hospital the opportunity to rectify the practice.

"In choosing not to do so, the opportunity was lost, deaths resulted and, 22 years later, it became necessary to establish this Panel in order to discover the truth of what happened."

Ms Wilson said her mother, who died in 2003, would have been "greatly upset" by not being listened to, and shocked that they "seemed to put the institution above the welfare of the patients".

She added that other nurses agreed with her mother, but were too frightened to speak out.

In the wake of the report, which was published on Wednesday, Health and Social Care Secretary Jeremy Hunt said the "blame" culture in the NHS had to change, and said it was sometimes made too difficult for whistleblowers to raise concerns or for medics to admit mistakes.

Relatives of elderly patients who died at the hospital branded the report's findings "chilling" and called for criminal prosecutions to be brought.

Hampshire Constabulary revealed on Thursday that the deaths would be investigated by a new force following criticism of the three previous police inquiries.

Chief Constable Olivia Pinkney said: "Having taken time to carefully consider the matter, I have made the decision that Hampshire Constabulary must take a step back.

"I certainly would never want to absolve my force of its responsibilities, but we cannot hide from the fact that the legacy of what has happened has caused considerable damage to confidence in the agencies involved, including my own.

"The force has always acknowledged that the first two police investigations were not of a high quality.

"The report makes clear a view from the panel that the third did not look widely enough. We accept the panel's findings and I would like to take this opportunity to apologise for our part in the distress caused to families for so many years."

The Gosport panel found that, over a 12-year period as clinical assistant, Dr Jane Barton was "responsible for the practice of prescribing which prevailed on the wards".

However the Rt Rev James Jones, who led the inquiry, said events at the Gosport War Memorial Hospital were distinct, because they showed a "failure of the institution".