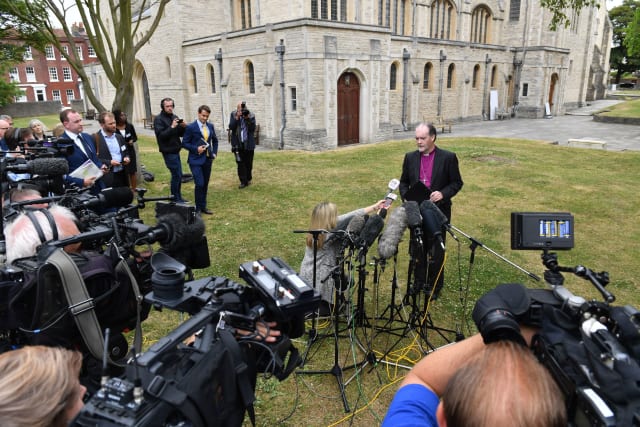 The NHS needs to face up to its failings and ensure a scandal similar to that at the Gosport War Memorial Hospital does not happen again, a leading health chief has said.

"Truly shocking" revelations that more than 450 people had their lives shortened after being prescribed powerful painkillers at the hospital emerged on Wednesday.

A damning report found an additional 200 patients were "probably" similarly administered with opioids between 1989 and 2000, without medical justification.

Health Secretary Jeremy Hunt said the Gosport Independent Panel had identified a "catalogue of failings" by the authorities and apologised to the families who lost loved ones in the scandal.

Speaking on BBC Two's Newsnight, Stephen Dorrell, chairman of the NHS Confederation, said the health service needed to learn from its mistakes.

He said: "The truth is, the system failed. We need to turn round, face that fact and ask ourselves what we can do to ensure we minimise the risk of it happening again."

He added: "Because the health service is a massively popular organisation and does massively good work most of the time, there's a tendency for those who work in the healthcare system to think they did their best.

"Well, on this occasion, their best was nowhere near good enough."

Mr Dorrell, a former health secretary, said he believed there had been improvements over the past 20 years, but stressed medical staff had a "collective" obligation to come forward about concerns within the healthcare system.

The inquiry, led by the former bishop of Liverpool, the Rt Rev James Jones, found that whistleblowers and families were ignored as they attempted to raise concerns about the administration of opioids at the hospital.

Nursing staff first raised concerns nearly 30 years ago but their fears were "silenced" by management, it revealed.

Mr Hunt told MPs: "There was a catalogue of failings by the local NHS, Hampshire Constabulary, the GMC (General Medical Council), the NMC (Nursing and Midwifery Council), the coroners and, as steward of the system, the Department of Health.

Professor Gary Ford, chief executive of the Oxford Academic Health Science Network, told Newsnight the findings should prompt healthcare professionals to look at how they respond to complaints.

Suzanne White, head of clinical negligence at Leigh Day and patient safety campaigner, told the programme she believed there was a "real cultural problem" within the health service, and added: "Lessons learnt are always the lines that come out after this, and I think if I was a family today hearing 'lessons will be learned', I'm not going to be convinced."

Following the release of the report, relatives of elderly patients who died at the hospital branded the findings "chilling" and called for criminal prosecutions to be brought.

Mr Hunt told MPs: "The police, working with the CPS (Crown Prosecution Service) and clinicians as necessary, will now carefully examine the new material in the report before determining their next steps and in particular whether criminal charges should now be brought."

He said any further investigations should be carried out by organisations not involved in previous probes, suggesting that Hampshire Police should bring in another force.

The panel found that, over a 12-year period as clinical assistant, Dr Jane Barton was "responsible for the practice of prescribing which prevailed on the wards".

But Mr Hunt questioned whether there had been an "institutional desire" to blame the events on a "rogue doctor" to protect reputations rather than address systemic failings.

The Gosport Independent Panel found that hospital management, Hampshire Police, the CPS, GMC and NMC "all failed to act in ways that would have better protected patients and relatives".

Concerns were first raised by nurses in 1991 but these warnings went "unheeded".

When relatives later complained, from 1998, they were "consistently let down by those in authority, both individuals and institutions".

Consultants, though not directly involved in treating patients on the ward, "were aware" of how drugs were administered but "did not intervene to stop the practice".

Mr Hunt also questioned why consultants or nurses did not act to stop those involved.

He added: "Was there an institutional desire to blame the issues on one rogue doctor rather than examine systemic failings that prevented issues being picked up and dealt with quickly driven, as this report suggests it may have been, by a desire to protect organisational reputations?"

Hampshire Police said it would be taking "time to properly digest the significance of what has been revealed".