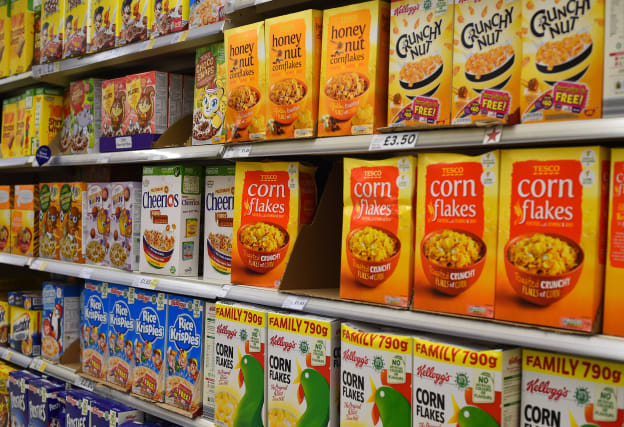 A watchdog has called for mandatory traffic light food labelling post-Brexit after finding that information on breakfast cereals could be misleading consumers about their sugar, fat and salt intake.

Many supermarket own-brands have adopted the traffic light scheme, but Which? found that household names such as Kellogg's are "lagging behind" to leave consumers facing a "bewildering" range of information about nutrition and portion sizes.

It found that cereals, porridges and granolas can contain more than three-quarters of the recommended daily maximum of free sugars in a portion - with the true sugar level not reflected on the packaging.

Further confusion could result from companies changing the portion sizes on their packaging or, in the case of Nestle, making comparison with other brands difficult by including a measure of milk in the front-of-pack nutritional information.

Of all the cereals and porridges it looked at, Which? found that Kellogg's Frosties and Kellogg's Crunchy Nut Cornflakes contained the most sugar per 100g, with a whopping 37g and 35g each - around the same amount of sugar per 100g as Burton's Wagon Wheels.

Sugar was the second or third highest ingredient in seven out of 10 flaked cereals included in the Which? study.

Even some apparently healthy cereals were comparatively high in sugar, such as Kellogg's All-Bran which contained 18g of sugar per 100g - almost two teaspoons of sugar in a 40g serving.

Plain porridge was also a healthy choice, with Quaker Oat So Simple and Ready Brek Original Porridge both containing 1g sugar per 100g.

The consumer group said shoppers would be "far better served" if all manufacturers used the traffic light scheme, which shows a high, medium or low level of sugar, salt and fat using red, amber and green traffic light colours based on the amount per 100g.

Under current EU regulations, this form of labelling is only a voluntary requirement, so some manufacturers are not using it.

Which? is calling on the Government to use Brexit as an opportunity to introduce legislation that makes traffic light labelling mandatory as part of an approach aimed at boosting the nation's health and well-being.

Alex Neill, Which? managing director of home products and services, said: "It is clear that the current, non-standardised food labelling system is at best confusing and at worst misleading.

"Helping people to compare at a glance how much sugar, salt and fat a product contains has proven to be an effective way of helping them to make healthier food choices.

"The Government must not miss this opportunity to use Brexit to make traffic light labelling a legal requirement, so consumers finally have clear information to make better and more informed choices."

"Any post-Brexit review of EU food laws gives the Government the opportunity to introduce legislation to standardise food labelling.

"At a time when two-thirds of adults and more than a fifth of four- and five-year-olds are obese or overweight, helping people make more informed choices about what they eat will clearly also help tackle the obesity crisis we face as a nation."

A Kellogg's spokeswoman said: "We recognise we have a role to play in helping people make healthier choices. That is why, at the end of last year, we announced our most ambitious plan to overhaul our cereals, including a 40% reduction in the amount of sugar in Coco Pops, taking high-sugar Ricicles off supermarket shelves and launching a range of vegan, organic and no-added sugar granolas.

"We know there is more we can do, which is why we are always looking at ways of giving people more of what they want in our cereals, like wholegrain and fibre, and less of what they don't, like sugar and artificial preservatives."

A Nestle spokeswoman said: "We want to help people make informed choices about their food by providing clear nutritional information on pack.

"All of Nestle's wholly owned products sold in the UK, as well as Nestle Cereals, follow the UK government's voluntary, colour-coded front of pack labelling scheme."

Doctors without PPE ‘bullied and shamed’ into treating patients