Leslie Grantham: An eventful life on and off screen 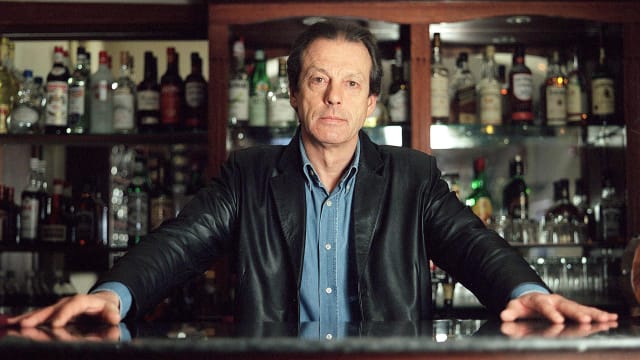 Leslie Grantham was known to millions of viewers for his role as adulterous Queen Vic landlord Dirty Den.

Dirty Den was believed to have been shot dead by a hitman in 1989, but Grantham made a shock return to Albert Square in 2003.

And some 17 million viewers watched his return to the BBC One soap.

Off screen, London-born Grantham had an eventful personal life.

As a teenager, in 1966 he was convicted of murdering a German taxi driver while serving as a soldier - a charge he always denied.

He served an 11-year sentence and later returned to Leyhill Open Prison in Gloucestershire as a VIP guest to open an art exhibition.

He said the jail fostered his interest in amateur dramatics.

In 2004, Grantham was exposed after taking part in webcam sex sessions from his EastEnders dressing room at Elstree Studios.

He issued an apology for the scandal, which had also seen him criticise his co-stars, describing his actions as "a moment's stupidity" of which he was "wholeheartedly ashamed".

Dirty Den was killed off for the second and final time - by his second wife Chrissie (Tracy-Ann Oberman) - in 2005.

Grantham felt that EastEnders was not what it once was.

"With Den and Angie, one minute he'd make you laugh, the next he'd cut your legs off. There was humour. Everyone thought Den was a lovable rogue. He wasn't evil, he was just Jack the lad," he told the Press Association.

"When he came back a second time, he suddenly became this Machiavellian character. I'm not saying it was better when I was in it, but when you're doing four episodes a week, you can't keep up that level of consistency."

Grantham and actress Jane Laurie, the mother of his three sons, divorced in 2013 after being married for more than 30 years.

Having almost disappeared from the small screen, Grantham in his later years focused on touring theatre work and panto.

In 2016 he published his debut children's fantasy novel Jack Bates And The Wizard's Spell.

He was offered reality shows but turned down what he called "humiliation TV".

And Grantham, reported to be living in Bulgaria before he died at the age of 71, was philosophical about his life.

"Life isn't a straight line. It's like travelling the motorway. Every now and then, you have to take a diversion," he told the Press Association.

"Unfortunately, some of my diversions have been quite catastrophic. But I'm safe in the knowledge that what I do now is good."