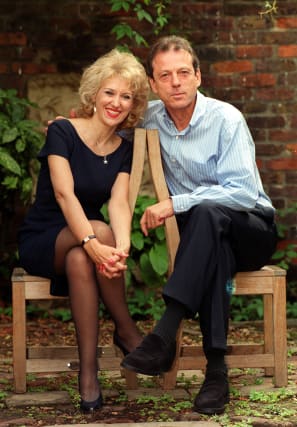 Anita Dobson has said Leslie Grantham was the "archetypal charming rogue" and spoke of their "magic" chemistry as she paid tribute to her EastEnders co-star, who has died aged 71.

Grantham, who was best known for playing "Dirty" Den Watts on the soap since 1985, died on Friday.

His representative said in a statement that Grantham's "ex-wife and sons have asked for their privacy to be respected at this difficult time, and for there to be no approaches to them for information or comment."

Dobson, who played Grantham's on-screen wife Angie Watts in the soap, told BBC News: "He was a good-looking guy, he was a charmer, he was funny, he was a good actor. And he was fun to be around, we were good mates.

She said working with Grantham was full of "memorable times", adding: "They changed my life and they changed his, and I think we were both really lucky that we were cast opposite each other, because the chemistry was magic.

"We didn't have to do anything, it just happened. We learnt our lines, we met on set and bang, we were off."

Dobson added: "I came from nothing, from the East End with no money, and Leslie, as you know, had a chequered life before EastEnders, but we sort of understood each other, we understood that life can be tough.

"And we were fortunate, we were catapulted to an exotic place, but we were playing real people, people that we knew and we loved it."

Grantham shot to fame playing Den in EastEnders, originally from 1985 to 1989.

A 1986 Christmas Day episode drew an audience of more than 30 million viewers, who watched as Den handed over divorce papers to Angie.

His character was apparently killed off in 1989 but made a shock return to Albert Square in 2003, before making his final departure in 2005.

Other EastEnders stars have shared their memories of working with Grantham, including Letitia Dean, who appeared on the BBC programme as Sharon Watts, the adoptive daughter of Den and Angie.

Dean said, via the EastEnders Twitter account: "I have very special memories of working with Leslie and will cherish them always.

"He and Anita looked after me in my early days and showed me the ropes, always with care and kindness.

"He never failed to make me laugh and I will remember him with love, affection and gratitude forever. See you up there Leslie! Thank you for everything. Love and respect always, Tish. X."

Gillian Taylforth, who appeared alongside Grantham from 1985 in EastEnders, said she was "deeply saddened to hear the very sad news".

The Kathy Beale actress said: "I have so many happy memories of working with Leslie, he was always great fun and we shared many laughs.

"Those iconic Christmas episodes were legendary and they will always be part of EastEnders history. My heart goes out to his loved ones."

Dot Cotton actress June Brown, another original cast member, said: "I was very fond of Leslie and am so sorry that he has gone.

"I always enjoyed talking to him, he made me laugh and always had a twinkle in his eye when he said outrageous things."

Brown said Grantham was "a wonderful and special actor, witty and very talented", and that she will "remember him very fondly and with affection."

Shane Richie, known for playing Alfie Moon on the soap since 2002, tweeted that he has "fond memories trying to make each other laugh in front of camera", referring to working with Grantham in 2004.

Richie added that Grantham was "a natural charmer & genuinely gracious, he had his demons but don't we all! BUT there's no denying he was & will always be @bbceastenders greatest landlord #RIPLesleyGrantham."

Prior to his EastEnders career, in 1967 he was convicted of murdering a German taxi driver while serving as a soldier, which he has always denied, and he went to prison until 1977.

In 2004, he was forced to apologise after he took part in webcam sex sessions from his EastEnders dressing room, the results of which went public.