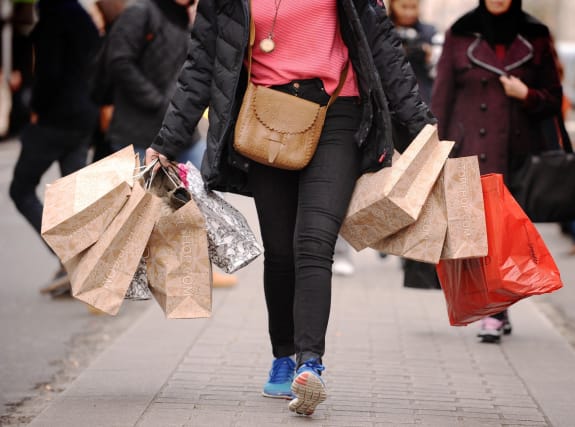 Retail sales jumped for a second month in a row in May as sustained good weather and the royal wedding encouraged shoppers to splash out on food and household goods, figures show.

Sales were up 1.3% compared with April, with growth across all main sectors, on the back of an upwardly revised 1.8% jump the month before, the Office for National Statistics (ONS) said.

Feedback from retailers suggested that the extended period of good weather and celebrations around the wedding of Prince Harry and Meghan Markle led to spending in food and household goods stores.

Compared with a year earlier, sales volumes rose sharply by 3.9%, the biggest rise in more than a year - possibly due to a combination of warm weather and slow year-on-year growth in May 2017 at 0.8%, the ONS said.

Online spending for food, department and clothing stores also continued to increase, achieving new record proportions of online retailing in May at 5.8%, 17.4% and 17.6% respectively.

Ian Gilmartin, head of retail and wholesale at Barclays Corporate Banking, said: "The really encouraging aspect to today's figures is the breadth of positive data, with growth posted across the different parts of the retail sector.

"We shouldn't get carried away as it's still very tough out there, but the truth is that despite continued rumours of the demise of our retail industry, many retailers are simply getting on with the job and continuing to attract customers through their doors."

Rachel Lund, head of retail insights and analytics at the British Retail Consortium, said: "Consistent with the figures released by the BRC earlier this month, official figures confirmed that May was a good month both on the high street and online.

"The arrival of a consistent spell of summery weather unlocked latent demand for summer wardrobes and outdoor goods.

"This comes as a welcome sign for retailers that shoppers are still willing to spend, however one swallow doesn't make a summer.

"The economic environment remains tough for both consumers and retailers alike and is likely to remain so for some months to come."