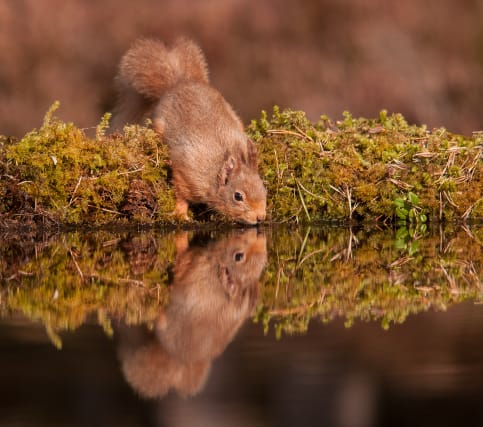 At least one in five British mammals is at high risk of extinction in the face of threats such as disease and loss of their natural habitat, a study has found.

Red squirrels, wildcats and grey long-eared bats are among the species which face severe threats to their survival, the first major review of British mammals for more than 20 years revealed.

Populations of nine species, including hedgehogs, water voles, hazel dormice and even rabbits, have declined in the last 20 years, the study of 58 native, "naturalised", introduced and reintroduced species, showed.

Hedgehog numbers have fallen by two-thirds since the previous estimate in 1995, while red squirrels have also suffered marked declines and water vole populations are thought to be just a 10th of what they were in the 1990s.

There is better news for some species, such as otters, whose range has expanded since the banning of pesticides which poisoned their river homes, and pine martens, polecats and badgers are recovering from former persecution.

Deer, which have no natural predators in the UK, have increased in number, and beavers and wild boar have returned to British shores since the last time such a study was completed.

But even some of the species doing better since the 1990s are listed as being at risk of extinction.

The study, led by the Mammal Society and commissioned by government agency Natural England, examined 1.5 million records of mammals across Britain including data from "citizen science" reports and local wildlife groups.

It maps where mammals are found and estimates their population, and how that has changed since previous studies in the 1990s, and assesses their risk of extinction against internationally agreed criteria.

While it found that almost one in five species (12 out of 58) is threatened with extinction across Britain, a lack of data means the true figure is likely to be higher, the experts said.

Mammals face a range of threats, including loss of habitat such as ancient woodland, the presence of invasive species which prey on them or compete with them for food, and diseases introduced by humans or other animals.

Nathusius' pipistrelle bat, which migrates across Europe, is at risk of collisions with onshore wind turbines and even offshore turbines, while there are concerns about the impact of hunting on mountain hares.

And there is just one known greater mouse-eared bat in Britain, described as like "Lonesome George", the giant tortoise on the Galapagos Islands who was the last of his species.

Fiona Mathews, chairwoman of the Mammal Society and professor of Environmental Biology at the University of Sussex, warned that Britain is on a "little bit of a precipice".

"We have a few winners - the deer and carnivores - but if you look beyond the deer and the carnivores, it's difficult to see many native species that look like they're are doing well or increasing," she said.

She added that there is a need to think about fixes that work, rather wasting money on things such as road crossings for mammals that are ineffective, and to look at the role animals including beavers and wild boar play in the landscape.

And she said: "We need to stop thinking of wildlife as something that happens somewhere else, and we just put a ring around it, and that's all your animals sorted.

"The idea of tiny nature reserves, national parks and so on is a bit of a worry because most of the British landscape isn't like that.

"Most wild animals move over a wide distance, and we need to make sure we have connective landscapes, we have places throughout Britain where animals have a home."

She called for more research to get a clearer and more accurate picture of Britain's mammal populations.

And with the UK set to redesign its system for paying farmers to manage land as it quits the European Union, the experts called for payments that deliver results, and support for managing marginal land, hedgerows, and patches of woodland for wildlife.