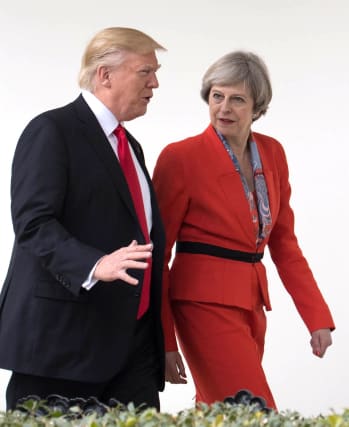 Donald Trump has dealt another blow to G7 unity after calling for Russia to be readmitted to the group - a call rejected by Theresa May.

The Prime Minister said Vladimir Putin's Russia - thrown out of the group of leading industrialised nations in 2014 - should not be readmitted until it could demonstrate a change of course.

Mr Trump was already at odds with the rest of the group - the UK, Canada, France, Germany, Italy and Japan - over the imposition of tariffs on steel and aluminium.

His comments on Russia - backed by Italian Prime Minister Giuseppe Conte - added further to the tensions at the summit in La Malbaie in Canada.

Mr Trump said: "Russia should be in the meeting, should be a part of it."

But Mrs May told the BBC: "I have always said we should engage with Russia but my phrase is 'engage but beware'.

"We should remind ourselves why the G8 became the G7, it was because Russia illegally annexed Crimea.

"We have seen malign activity from Russia in a whole variety of ways, of course including on the streets of Salisbury in the UK.

"So we need to say, I think, before any such conversations can take place Russia needs to change its approach."

The Prime Minister has been at the forefront of diplomatic efforts to build an alliance against Russia after the Salisbury nerve agent attack on ex-spy Sergei Skripal and his daughter Yulia.

At the G7 summit Mrs May was holding formal face-to-face talks with all of the other leaders - except Mr Trump.

The US president is expected to depart the two-day summit early on Saturday, leaving the rest of the group behind.

Asked if Mrs May believed she had been snubbed, a Downing Street spokeswoman replied: "No."

But the Prime Minister twice refused to say whether she had requested a formal bilateral meeting with Mr Trump.

She told Sky News: "I talk with President Trump regularly, I talk on the telephone, I spoke to him earlier at the beginning of this week and I'll be talking to him around this G7.

"What is important is that the UK and the United States actually come together in a whole variety of ways to talk about the issues that matter to us both.

"In the future we'll be talking about future trade relations, but of course the security relationship that underpins the UK's long-standing special relationship with the United States is of particular importance to us."

Asked if Mr Trump was a good friend to the UK, Mrs May told Channel 4: "The United States and the United Kingdom are good friends. President Trump and I work together.

"Yes, sometimes we disagree on issues but when we disagree because of the nature of our relationship we're able to have that frank and open discussion."

The US leader fired off a series of messages on Twitter hitting out at his counterparts before the summit even opened.

He said the summit was an opportunity for "straightening out unfair trade deals" with the rest of the G7 - adding "if it doesn't happen, we come out even better".

Mrs May hopes to use the summit to avert a wider trade war, insisting she wants a "proportionate" response from the European Union to the "unjustified" US tariffs.

But before the summit had even begun Mr Trump was engaged in an extraordinary public spat with Canada's Justin Trudeau and French President Emmanuel Macron.

Mr Macron - who has cultivated a close relationship with Mr Trump over recent months - stressed that the US was isolated.

Mr Trump posted a series of messages on his favourite social media platform, accusing the EU and Canada of imposing "massive trade tariffs and non-monetary Trade Barriers" against the US.

The US has refused to exempt its allies from the 25% tariff on steel imports and the 10% duty on aluminium.

The European Commission has confirmed it intends to hit back with retaliatory tariffs from July on US imports ranging from jeans to bourbon whiskey.

The EU members of the G7 had a special meeting in the margins of the summit to discuss tariffs and the Iran nuclear deal, which Mr Trump also opposes.