May begins round of diplomacy at stormy G7 summit 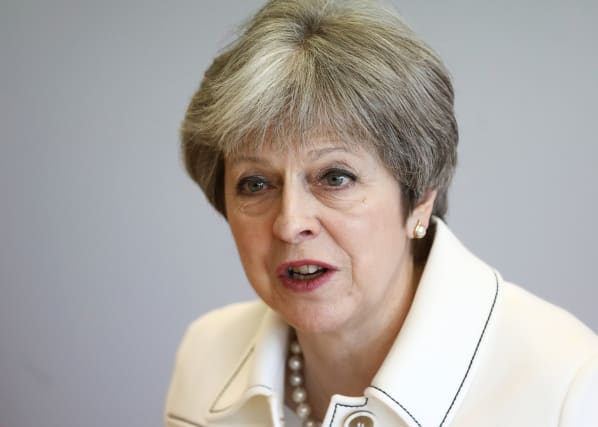 Theresa May has begun a round of diplomacy as the G7 summit threatened to descend into an angry confrontation over Donald Trump's trade policies.

The Prime Minister is expected to have formal meetings with the leaders of all the G7 countries at the group's summit in Canada - except the US president.

The US leader fired off a series of messages on Twitter hitting out at his counterparts before the summit even opened, and is expected to leave the gathering early in a sign of the frosty atmosphere.

He is at odds with the other six countries in the group - the UK, Canada, Germany, France, Italy and Japan - over his protectionist tariffs on steel and aluminium.

Mr Trump is expected to leave the two-day summit in La Malbaie in the Charlevoix region of Quebec early on Saturday, with little time for formal bilateral meetings in front of the world's press.

Asked if Mrs May believed she had been snubbed, a Downing Street spokeswoman replied: "No."

Mrs May, who began her activities at the summit by meeting host Justin Trudeau, is expected to have informal talks with the US president.

She will seek to use the summit to avert a wider trade war, insisting she wants a "proportionate" response from the European Union to the "unjustified" US tariffs.

But before the summit had even begun Mr Trump was engaged in an extraordinary public spat with Mr Trudeau and French President Emmanuel Macron.

Mr Macron - who has cultivated a close relationship with Mr Trump over recent months - stressed that the US was isolated.

But Mr Trump posted a series of messages on his favourite social media platform, accusing the EU and Canada of imposing "massive trade tariffs and non-monetary Trade Barriers" against the US.

The president threatened to take retaliatory action against them unless there was reform.

He wrote: "Why isn't the European Union and Canada informing the public that for years they have used massive Trade Tariffs and non-monetary Trade Barriers against the U.S.

"Totally unfair to our farmers, workers & companies. Take down your tariffs & barriers or we will more than match you!"

The Prime Minister told reporters travelling with her: "I made my views clear on the steel and aluminium tariffs that President Trump has announced, I have done that directly to him.

"My most recent conversation with him was on Monday this week.

"We disagree with these, we think they're unjustified.

"Obviously the European Union will be responding.

"We want to ensure, and we're working with others in the European Union to ensure, that this response is proportionate, that it is within the WTO rules."

The US has refused to exempt its allies from the 25% tariff on steel imports and the 10% duty on aluminium.

The European Commission has confirmed it intends to hit back with retaliatory tariffs from July on US imports ranging from jeans to bourbon whiskey.

The EU members of the G7 will have a special meeting in the margins of the summit to discuss tariffs and the Iran nuclear deal, which Mr Trump also opposes.

Mrs May said: "As the UK, we want to be a great champion of free trade around the world and that's what we will continue to be.

Meanwhile, Mrs May was also using the summit to call on internet giants to do more to remove content showing violence against women.

She will encourage companies to do more to quickly identify and take down online content promoting or depicting violence against women and girls, including illegal violent pornography and rape threats on social media platforms.